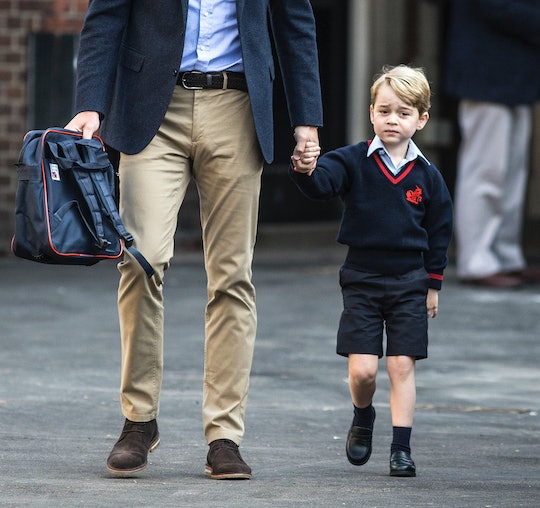 All kids have their special thing. You know, like the toy or TV show they can't enough of at the moment. With my nephew, it was Star Wars, and my oldest was really into baby dolls. The youngest preferred penguins, while my middle one was all about Harry Potter. So why should England's royal family be different? And I can't help but think Prince George's latest obsession totally makes sense.

George, 6, the oldest of William and Kate Middleton's three adorable children, especially loves tractors, as his dad recently revealed, according to The Sun. The paper noted that this new tidbit stems from a new documentary British TV channel ITV is launching, Prince Charles: Inside The Duchy Of Cornwall.

The new special details the royal family's connection to the land, which as a private estate gives revenue to Prince Charles and his charities (and also benefits his heirs, including Prince William and Prince Harry's families) to the tune of £21 million a year aka 28 million in the U.S., according to MSN.

Aside from finances, however, the special shows the day-to-day running of the 130,000 acres of land, which includes the London Borough of Kensington and stretches all the way to Dartmoor, in the country of Devon.

William is quoted as saying that when he and the fam visit the countryside, they're not shy about enjoying everything it has to offer — including its tractors.

When meeting local farmer Mervyn Keeling on camera, Prince William said, according to Harper's Bazaar: "I should have brought George today; he would be absolutely loving this…He’s obsessed...My children are already, y’know, playing on the tractors and, like you say, it’s so important to get outside, and have the children understand nature.”

Even if George wasn't a kid whose family owned acres of land featuring countless vehicles, the whole tractor/transport thing makes sense for a kid of his age. and although I wouldn't call this a "boy" thing since I know little girls who are also all about planes, trains and automobiles (and the Sun reported Princess Charlotte and Prince George also enjoy tractors when in the country), having a thing for tractors is definitely a popular pastime for young boys.

What's more? Prince George has liked tractors ever since he was a tiny tyke.

The difference here, of course, is that most kids in the city only ever get to play with a miniature toy tractor — not real ones. (Pretty sure a young royal like George has both, though.)

As for this gorgeous swath of English land George and his siblings will one day inherit, People reported that the estate was created about 700 years ago by Edward III, with Prince Charles, a keen student of environmentalism and architecture, currently running it all, according to People.

When the baton of running such a large country estate is passed to Prince William, he intends to preserve it. "Rest assured I’m not going to rock the boat...I’ll do much the same as what my father’s doing," he noted to the documentary's camera crew.

Either way, it's nice to know that Prince George and his siblings have a special connection to the outdoors. And his parents' commitment to preservation means they'll always appreciate the beauty of their country, including its trucks and tractors.