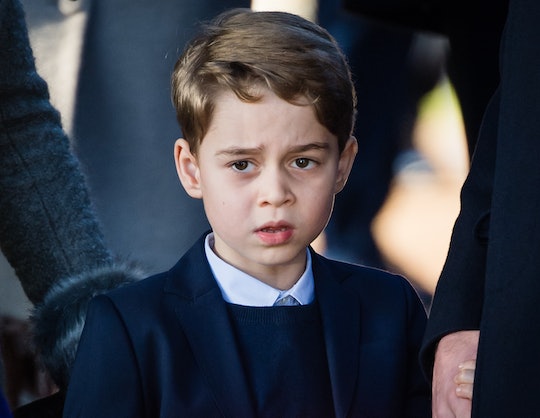 As the oldest child of the Duke and Duchess of Cambridge, 7-year-old Prince George has a pretty solid career path ahead of him. However, during a recent interview, Prince William revealed what he thinks Prince George could also be when he's older, and it doesn't involve a crown.

But just because he can see his son playing for Aston Villa one day, Prince William told Crouch that he would not try to influence his 7-year-old son to love his favorite team too much. "I'm not trying to persuade him to be a Villa fan — I'm letting him choose his own way," the Duke of Cambridge said on the podcast. "It's about finding what fits him."

Now, it wouldn't be too surprising if Prince George explored that career path; he really does love soccer or football, as they refer to it across the pond. Prince George has been seen rooting on Aston Villa at a soccer match and casually playing soccer with his younger sister Princess Charlotte, and he even asked Santa for a soccer ball for Christmas in 2019, according to Hello! Magazine. So, yeah, he definitely has an interest in the sport.

But can Prince George be a professional football player and a future king at the same time? It's possible. Both Prince William and Prince Harry have held jobs in the military, according to The Daily Express; Prince William was a helicopter pilot for the East Anglian Air Ambulance for two years and Prince Harry served as a soldier in the British army for 10 years. Even Queen Elizabeth II is a trained mechanic who served in World War II, according to Reader's Digest.

But if Prince George wants to set his sights on a career in sports, that doesn't seem like it's out of the realm of possibilities. Prince William's cousin, Zara Tindall, is an accomplished equestrian and competed in the London 2012 Olympics as a member of Great Britain's equestrian eventing team and won a silver medal, according to Town & Country.

Only time will tell if Prince George ends up being a professional soccer player on his dad's favorite team while also living his royal life.

More Like This
Queen Elizabeth's Corgis Will Be "Spoiled Rotten," According To Prince William
Prince William Was Quick To Remind Someone That He Does School Drop-Off Duty Too
Prince George Was Comforted By His Aunt Sophie At Queen Elizabeth’s Funeral
Princess Charlotte Reminds Prince George To Bow At The Queen's Funeral In Viral Video