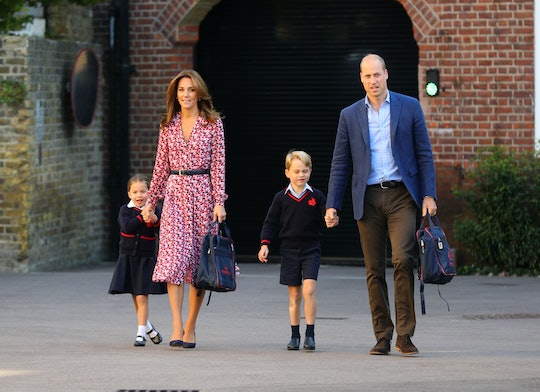 Explaining complex topics to young children in ways they can understand is tough, but it's a challenge every parent faces. And recently, Prince William shared his children had questions about homelessness and opened up about why it's a cause so close to his heart.

The father of three opened up about the subject in a holiday special called A Berry Royal Christmas airing on BBC One on Dec. 16 featuring himself, Kate Middleton, and The Great British Bake Off's Mary Berry. During the special, Prince William talks about how he teaches his children about the causes they support, such as the homelessness charity, Centrepoint.

“On the school run — I know it sounds a little bit contrite — but on the school run already, bear in mind 6 and 4, whenever we see someone who is sleeping rough on the street I talk about it and I point it out and I explain,” the Duke of Cambridge explains in the special, of Prince George and Princess Charlotte, according to People. “And they are all very interested. They are like: ‘Why can’t they go home?’”

Earlier this year, Prince William helped prepare and serve meals at The Passage, a charity that serves people experiencing homelessness — and one that he had visited multiple times with his mother, the late Princess Diana. He also announced that same day in February that he is now a royal patron of The Passage. This came as little surprise, considering the Duke of Cambridge had previously shared the impact his mother taking him there had on him.

"The visits I made as a child to this place left a deep and lasting impression upon me – about how important it is to ensure that everyone in our society, especially the poorest, are treated with respect, dignity and kindness, and are given the opportunities to fulfill their potential in life," Prince William said in 2016 in a release from Buckingham Palace.

Clearly, this lasting impression has inspired Prince William to pass along these important messages to his own children, thanks to Princess Diana's own activism. “My mother knew what she was doing with it," he said in the BBC One special. "She realized that it was very important when you grow up — especially in the life that we grew up — that you realize that life happens beyond palace walls, and that you see real people struggling with real issues."

Ahead of A Berry Royal Christmas' premiere, the Kensington Palace social media accounts shared a photo of young Prince William and Prince Harry posing with Princess Diana at The Passage in 1993. The caption explains that The Passage was helped more than 130,000 people in crisis through its resource center, homelessness prevention projects, and accommodation services since it was established in 1980.

Although it can be a tough subject to tackle, homelessness doesn't have to be a taboo topic for kids. Speaking candidly with children about it — and even getting them actively involved in helping — allow kids to both feel empathy and make better sense of the world around them. It certainly did for Prince William.