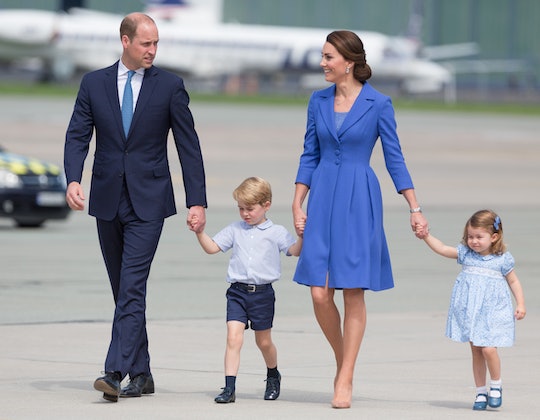 It's easy to see why Prince William thought a photo of him was Princess Charlotte — those royal genes are strong. While 4-year-old Princess Charlotte does look a lot like her great grandmother, Queen Elizabeth II, when she was a little girl, it seems she has one more twin. So much so, in fact, that it made her own father do a double-take.

On Wednesday, Jan. 15, Prince William and Kate Middleton paid a visit to the Khidmat Community Centre, where they were greeted by a handcrafted cake and cupcakes made by baker Sima Ali with images of themselves and their kids printed on them. Super impressive, right? While the couple was amazed by the fully edible display, Prince William got distracted for a moment when he saw a cupcake with a photo of him from when he was younger. In a video taken from the visit, Prince William can be seen marveling over the intricate design and stopping in his tracks when he comes across the picture of himself.

"Is that me? Or is that Charlotte?" he asks in the video. Middleton agrees and replies, "That looks so much like Charlotte!"

Prince William even had to ask Ali, who handpicked the photos for the cupcakes, if that was him in the photo. "Is that me? Oh my goodness, is that me? Because that looks just like Charlotte. That's incredible."

Unfortunately, you can't tell from the video which photo was used on the cake, but if you compare other photos of Prince William and Princess Charlotte, it's easy to see why he had to do several double-takes. Below, you can see how both around 1 year old look so alike.

They also share the same ability to make some pretty fantastic facial expressions.