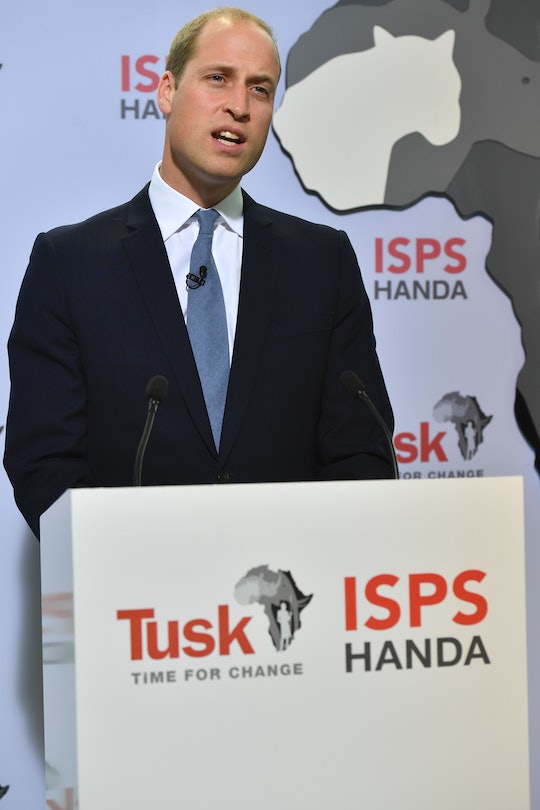 This weekend, the Convention on International Trade in Endangered Species will vote on an important issue: deciding the future of elephant conservation. On Thursday, Prince William spoke passionately on the issue by stating how soon the species could become extinct. "At the current pace of illegal poaching, when Charlotte turns 25 the African elephant will be gone from the wild," he said to policymakers and campaigners. Prince William's message that Charlotte must grow up in a world with wild elephants is crucial for the protection of this endangered species.

Prince William spoke on the issue at the event Time for Change in London, which was organized by Tusk, a wildlife conservation charity.

Prince William said that when he born in 1982, there were one million elephants across Africa, The Guardian reported. But by the time "my daughter Charlotte was born last year, the numbers of savannah elephants had crashed to just 350,000," Prince William said.

The Great Elephant Census revealed how staggering the decline in the elephant population across African savannahs has been: in just seven years, there has been a 30 percent drop.

Although an international ban on the ivory trade was established in 1989, in 2008, the Convention on International Trade in Endangered Species allowed China a one-time trade ivory from four southern African countries, which at the time had large elephant populations. The black market for ivory rose exponentially after this incident.

Confiscated ivory rose from 3.2 tons in 2010 to 7.9 tons in just part of 2013 in Hong Kong. Altogether, that number is equal to of 1,675 dead elephants, Smithsonian Magazine reported.

Additionally, there is a loophole that allows antique dealers to trade ivory — and because that trade isn't highly regulated, some merchants are selling ivory from recently killed elephants and passing it off as antique, without having to providing proof of age.

Now, the international ban on ivory trade is set to end, putting the dwindling population of elephants and rhinoceros at further risk.

"We have the chance to say that ivory is a symbol of destruction, not of luxury, and not something that anyone needs to buy or sell," Prince William said Thursday.

A coalition of 29 African countries have proposed a complete end of the ivory trade. However, the governments of Zimbabwe, Namibia, and South Africa will attend the convention this weekend in an attempt to lift the ban, The Independent reported. They argue that the ban has been expensive and unsuccessful in trying to end poaching.

In his speech, The Duke of Cambridge argued that "materialistic greed" should not outweigh moral responsibility to protect animals. “I am not prepared to be part of a generation that lets these iconic species disappear from the wild," he urged. Let's see if the prince's message is received when the convention meets this weekend.