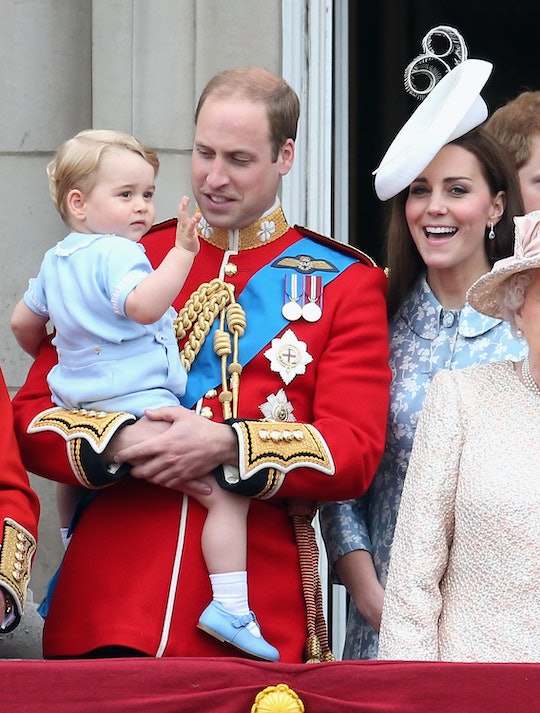 Modern dads are taking ownership of all sorts of parenting duties that might have been out of the question just a few years ago. From full-time, stay-at-home parenting to baby-wearing to rocking the diaper bag around town, there's no denying today's fathers are more involved in their kids' lives than ever before. That's why Prince William's Father's Day message is important for all dads to read, because kids' mental health deserves parents' attention just as much as their physical health.

Prince William, his brother Prince Harry, and his wife Princess Kate Middleton have joined forces to support Heads Together, an organization in the U.K. dedicated to bringing attention to mental health issues and removing some of the stigma to encourage people to seek help. And William, whose new title is the Duke of Cambridge, wrote a Father's Day editorial encouraging dads to take an active role in nurturing their children's mental health, according to Us:

For me it is a day not just to celebrate how fortunate I am for my young family, but to reflect on just how much I’ve learned about fatherhood and the issues facing fathers in all walks of life. In particular, it is a time to reflect on my responsibility to look after not just the physical health of my two children, but to treat their mental needs as just as important a priority.

And Heads Together released a video on Father's Day featuring the Duke:

How can parents start to engage with their kids about mental health? According to Prince William, an important first step is to just "take a moment and ask their children how they are doing."

The Heads Together organization also issued a broader challenge to fathers to get involved with their kids' mental well being by releasing a quickie questionnaire to help dads and kids ask each other about their feelings. Questions like: "If your dad is feeling sad or down, what makes them feel better?" or "What makes your dad cheer up?" They are simple questions meant to get fathers and their kids to start getting comfortable opening up and talking about their feelings.

Heads Together also recognized that Father's Day can be a difficult time for those who have lost their dads, and the organization provided links to resources that can help anyone who is feeling sad or lonely.

Recent surveys have found that over half of parents have never broached the topic of mental well-being with their children, and a third would feel like failures if their child needed help. That’s so sad — no parents whose child needs help is a failure. Taking the next step and actually getting help is what matters.

Getting more fathers in the game of accessing and dealing with their feelings — a quality all people should have, not just mothers — and setting a good example for their kids sounds like an excellent way to celebrate Father's Day.