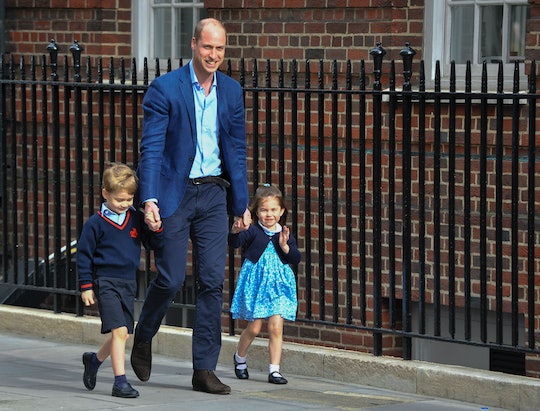 Prince William Spending His Free Time Sleeping Is Every Parent Ever

Although it's fun to imagine that members of the royal family have exotic and invigorating hobbies, like skydiving or aerial acrobatics, the reality is much more low-key. In fact, it seems that Prince William spends his free time as a dad napping, a hobby many parents can relate to as sleep is often a precious commodity when you have young children.

As the second in line to the throne and the father of three children under the age of 6, Prince William is undoubtedly a busy man. So it's no wonder that he opts to squeeze in a bit of rest wherever he can find it. The Duke of Cambridge was heard discussing his busy parenting schedule and need for naps with music legend Eric Clapton on Thursday.

"With the children it's quite hard to get the time off," Prince William told Clapton when asked about his hobbies, Hello! reported. "Any free time I do get, I sleep!"

The two were both in attendance at a gala fundraiser honoring London's Air Ambulance Charity held at the luxury hotel Rosewood London, according to both Hello! and The Mirror. According to The Mirror, Clapton and Prince William were on a first name basis and "appeared to be old friends," talking about a number of things apart from the royal's sleep schedule.

Although this may be the first time we've heard Prince William admit that he prefers to spend whatever bit of free time he manages to find between his job and parenting sleeping, it's certainly not the first time the royal has made headlines for looking, well, tired. On April 26, 2018, two days after the birth of his third child, the media spotted Prince William in what appeared to be a battle against sleep during a royal function.

While attending an annual Anzac Day Service of Commemoration and Thanksgiving at Westminster Abbey alongside younger brother Prince Harry and Meghan Markle, Prince William was caught by cameras struggling to keep his eyes open. "The royal appeared to drift off a few times, then waking back up with numerous blinks," People reported of the incident.

But although Prince William may have needed a couple extra minutes of shut eye that day, the father of three told People his newborn son had already mastered sleep. "Sleeping's going reasonably well so far, so he’s behaving himself which is good," the celebrity magazine reported Prince William said ahead of the 2018 Anzac Day Service. The Duke of Cambridge went on to describe both his wife and Prince Louis as being "in good form, luckily," according to People.

Since that incident, Prince William has joked about the lack of sleep that comes with parenting. In May, just after the birth of baby Archie, he jokingly told Reuters that he was "very pleased and glad to welcome his brother to the sleep deprivation society that is parenting."

As much as Prince William may treasure his sleep (hey, don't we all!), he's in for a busy weekend of royal engagements. According to USA Today, Prince William and wife Kate Middleton will be joining Prince Harry and Meghan Markle on Saturday at the annual Royal British Legion Festival of Remembrance at Royal Albert Hall. The four will then attend the annual Remembrance Day Service at The Cenotaph in London on Sunday morning. Maybe the Duke of Cambridge can squeeze in a nap Sunday afternoon?