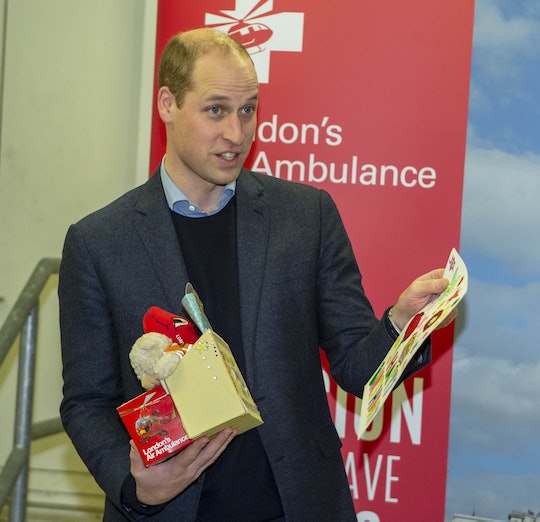 Prince William and his lovely spouse seem pretty amazing together, as both parents and partners in what's been called the royal "Firm." So it's nice occasionally to be reminded that these pillars of the palace are also regular people — and Prince William's joke about remembering Kate Middleton's birthday proves he's literally every husband.

The Duchess of Cambridge turned 37 years old on Wednesday, Jan. 9. And while I don't know the exact details of how she is celebrating her 37th year at home in the company of her kids and family (though Kate is reportedly throwing herself a British tea, including cake for the children, as The Cut noted), one super-interesting and relatable detail has come out: Her husband is just trying to do his best in the midst of a very busy life.

It seems most guys — even princes — do really have to work hard on stuff like remembering birthdays and anniversaries.

As the UK's Daily Mail newspaper reported, the joke came out while William, 36, was touring the Royal London Hospital in support of his just-announced association with the London Air Ambulance, which is a true lifesaver for those with medical emergencies who need to be transported to the hospital for urgent treatment, with the help of medics and other first responders.

Kensington Palace confirmed on Twitter that William, a former professional ambulance pilot as People noted, will be the new royal patron of the organization. The prince even reportedly got to break out his old flying skills and taking a spin during the visit, the Daily Mail reported.

But it was while meeting patients at the hospital that William got to show off his sense of humor.

Children had made cards and brought gifts for William to take to the Duchess of Cambridge, People noted, and William made sure to let everyone know that he had, in fact, remembered the big day before he left for work that morning.

"Well thank you for remembering! I did actually remember this morning, so I was OK," William told the laughing crowd, according to the Daily Mail. Phew. It sounds like it was close, though, which might make those who aren't members of the royal family feel a little better about how things can get in a romantic relationship after a couple jobs, a house (or castle), and multiple kids enter the mix, as well.

As in, it's so hectic you almost forget about big occasions that in the days before having a family, you would have spent weeks planning for.

Take birthdays: Where you used to arrange for a fancy dinner with that special violinist coming to your table to serenade your loved one, throw in one job for each of you and three kids and presto, now you're lucky if you manage a single rose at the check stand for your spouse.

Or, a "couples" thing, like an anniversary tradition to go see the stars at midnight, morphs into a family hike at noon, complete with children complaining about the minor hill you're climbing, followed by a trip to get ice cream that they were promised if they completed the hike.

And while I have no idea if those specific details at all dovetail with William and Kate's lives at the moment, it is true that they have about as much on their plates as any old regular family.

After all, Kate now has a brood of three kids: Prince George, 5, Princess Charlotte, 3, and Prince Louis, 8 months, as People confirmed.

And as the Metro UK newspaper added, Kate is now up to 17 British nonprofits that she helps champion as a royal patron. That's not just a few, guys.

So while I really hope Kate's birthday is all that she could wish for, it's not bad to see that even a world-famous, ultra-glamorous couple like the Cambridges consider it a good day if the husband just remembers what day it is on the calendar. Happy birthday to the Duchess of Cambridge!