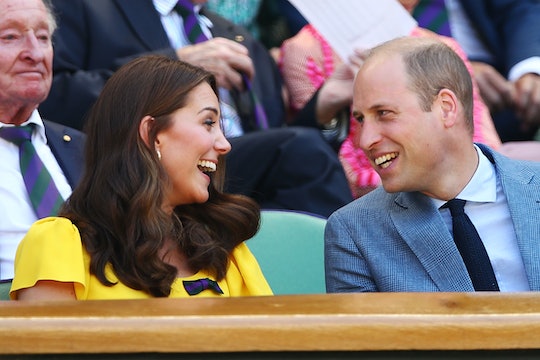 As one of the heirs to the throne, it seems like it is appropriate British custom for Prince William and his wife, Duchess of Cambridge, Kate Middleton, to refrain from public displays of affection. But that doesn’t mean they don’t communicate their adoration for one another, which has been heard rather than seen through Prince William’s cute nicknames for Kate Middleton, as Express recently reported.

As you'd expect, the prince keeps things proper when doing interviews, referring to his wife by her full name, Catherine, according to news.com.au. But in more private settings, even among other people, you'll be delighted to hear that he’s been heard calling her “darling”, “babe”, and “poppet,” as the site reported.

The most well-known of those displays happened in 2016 when the couple attended the Chelsea Flower Show, according to the International Business Times. As he knelt to look over a field of knitted poppies, the prince was reported to have turned to Middleton and asked, “Could you make one of these, darling?” the International Business Times reported. It’s a term of endearment they both use, since Duchess Kate was heard returning the affection later in the day.

A slightly different version of the story came from landscape gardener, Charlie Albone, when he spoke to TODAY on Australian news channel 9, according to Marie Claire. Albone was reportedly the one who told the prince the name of the Buxus, so he had some proximity to the exchange. He reported that the Duchess called her husband “babe” rather than “darling,” according to Marie Claire. Apparently in disbelief, the hosts asked him to confirm that “babe” was the right term, according to Grazia Daily. He replied, “Yeah, she actually called him ‘babe’, and said ‘we’ve got loads of those’”. It’s no matter really, the couple, like many others, probably use the terms of endearment of a regular basis, as Grazia reported.

A little more interesting was the revelation of the term “babykins” which came to light during a hacking scandal in 2006, according to the Daily Mail. It was information revealed in court during hearings against News of the World for hacking the prince’s voicemail, the Daily Mail reported. While the two were students and dating, Prince William reportedly left a voice message for Middleton saying, “My head’s all right. I’ve just picked up your message. Oh, my little babykins! I hope you are all right,” according to Daily Mail. In another message, as the Daily Mail reported, he called her “baby,” reportedly saying, “Hello baby, it’s me. Sorry I did not ring you earlier and tell you what I was doing. Been a bit of a nightmare day. I think I would just about be finished in a minute.”

More recently, OK! Magazine revealed the nickname that Prince Harry is believed to use for his sister-in-law. He is said to shorten her name to “Cath,” rather than “Kate,” the magazine reported. Radio host Scott Mills had the Cambridge couple on his show and asked Middleton about the nickname, which he said he’d heard Prince Harry use during a podcast, OK! Magazine reported. “I’m not sure. I’m not that familiar with it. But I will answer to most things,” she replied, according to OK! Magazine.

Personally, I always wish the royal couples would display just a little more PDA, since they are all so cute together. But overheard moments like these are good revelations that they are real people, and normal couples, just like the rest of us, navigating their love.