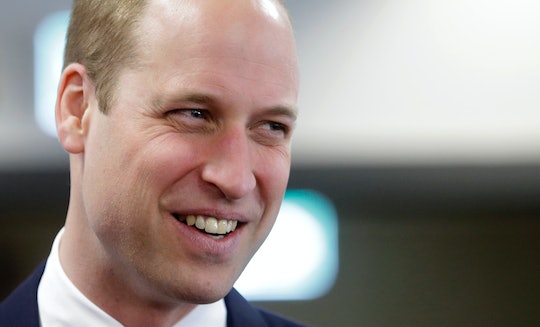 Early Monday morning her Royal Highness The Duchess of Cambridge, Kate Middleton, gave birth to her third child, a son. And, according to Kensington Palace, The Duke of Cambridge, Prince William, was present for the birth (as one would hope since he is, well, the dad). And while women give birth every single day all around the world, and partners are often present and involved, Prince William's reaction to Kate Middleton giving birth is the ultimate #DadGoals. Just remember, you don't have to be royalty to be a great parent.

According to a Kensington Palace statement via Twitter, the rest of the Royal Family have been informed of the birth and are over-the-moon happy for Middleton and company. "The Queen, The Duke of Edinburgh, The Prince of Wales, The Duchess of Cornwall, Prince Harry and members of both families have been informed and are delighted with the news." But, as to be expected, the world wants to know how mom and dad are doing and, more specifically, how dad feels about the arrival of baby number three. Per Kensington Palace, "Her Royal Highness and her child are both doing well," so Prince William's immediate concerns are, one can assume, assuaged. He has a healthy wife and a healthy child; the goal of any labor and delivery.

Prince William joked that he was trying to get as much sleep as he could before the baby's arrival during an appearance at a black tie event at Kensington Palace in February, according to ABC News:

Well, the third baby, a son, has arrived, so it's time to cope. And while Prince William wasn't necessarily doing any heavy lifting during his son's birth (we all know that excrutiating, and humbling, and beautiful responsibility goes to his wife, Kate Middleton) the third-time dad certainly seemed a tad tired as he quickly left the hospital to go back home to tend to his other two children, Charlotte and George.

Exhausted though he may be, Prince William also looked overjoyed. As he walked to the car to drive away he smiled, waved, and said he would "be back in a minute," presumably with his two children so he can introduce Prince George and Princess Charlotte to their new sibling. Is the royal family used to posing for the media and taking a plethora of pictures? Sure. But as a parent myself I can tell you that there are some smiles — some moments — you just can't fake. And in that moment, the world watched a proud dad leave the hospital after his sone was born with love, grace, and an overabundance of excitement.

According to Emily Andrews, a Royal Correspondent for The Sun newspaper in London, Prince George went to school, per usual, while his mother was in labor. Princess Charlotte, however, stayed home, so perhaps we will be able to see big sister meet her baby brother for the first time, or even the family of five together when Middleton and her new arrival leave the Lindo Wing of St Mary's Hospital in Paddington; the same hospital where Kate gave birth to Prince George and Princess Charlotte.

The addition of any child to a family, whether it's the first baby or the third, usually means a shift in priorities, schedules, and routines. But Prince William seems ready for life as a dad to three children, telling guests at the attended the Centrepoint Awards at Kensington Palace back in Feb. of this year that a third baby he can handle, as long as it was just a third baby, "Twins?" Prince William joked. "I think my mental health would be tested with twins."