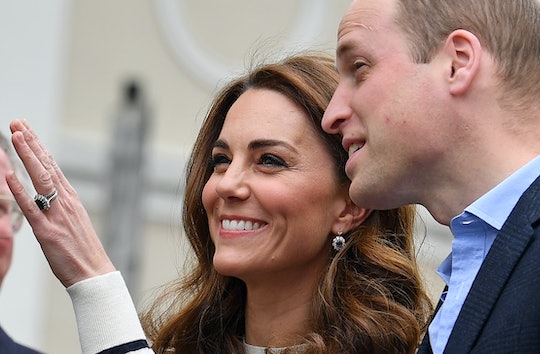 Prince Harry and Meghan Markle are finally and officially new parents, and of course, that means many sleepless night are in their future. The couple confirmed the arrival of their baby boy on Monday, May 6, and it appears the whole royal family is elated about the child's arrival. In fact, the Duke and Duchess of Cambridge sent a message to the new parents after the arrival of the baby and, in particular, Prince William's reaction to Prince Harry and Meghan Markle welcoming Baby Sussex was so sweet and also very silly.

In a video shared on the Kensington Royal Instagram account, Prince William and the Duchess of Cambridge welcomed Prince Harry and Markle "to the Sleep Deprivation Society!" after the arrival of their first son. Prince William said in the clip that he and Middleton were "thrilled" about the baby's birth. Neither he nor Middleton said any more about their new nephew, but Prince William did reveal that they hadn't yet gone to see the child and they'll be making that sweet visit in the coming days.

"I'm looking forward to seeing him in the next few days. I'm very pleased — glad — to welcome my brother to the Sleep Deprivation Society that is parenting," Prince William told the press while Middleton looked on and smiled. TBH, Every parent can relate to that sentiment. Long nights are just part of the territory.

Prince William is, of course, no stranger to lack of sleep. After Prince Louis' birth, the Duke of Cambridge appeared at the annual Anzac Day of Service and Commemoration and Thanksgiving at Westminster Abbey, according to TIME. And during the service, Prince William was spotted closing his eyes and nodding off for a moment, which is a move all parents know too well.

And it sounds like Prince Harry is already in a similar situation. According to ITV, when addressing the public about the arrival of his son, he admitted he'd "had about two hours' sleep." Still, he seemed cheerful with a big smile on his face, despite the lack of sleep.

"It's been the most amazing experience that I could ever possibly imagine," Prince Harry said of his son's arrival, according to NPR. "How any woman does what they do is beyond comprehension, but we're both absolutely thrilled."

Prince Harry and the former Suits actress welcomed their first child, a baby boy, on Monday, according to NBC News. Their son is seventh in line for the throne behind his father. So far, fans have not seen Baby Sussex, but his debut will come soon. According to People, Prince Harry vowed to step out with Markle and their baby boy in two days time, which would be Wednesday, May 8 (aka tomorrow).

Fans will just have to wait patiently for more details about the royal baby. And his upcoming and undoubtedly sweet debut is just one of many adorable family moments Prince Harry and Markle will have with their son throughout their lifetimes. Indeed, royal watchers are already looking forward to watching this sweet family grow. For now, however, Prince Harry and Markle should focus on their newborn... and getting some shut eye!