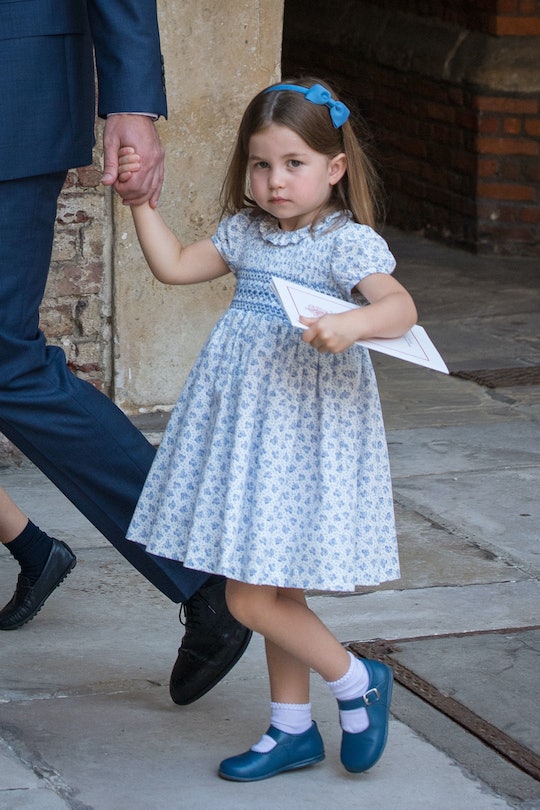 Princess Charlotte may only be sixth in line to the British throne, but she sure knows how to act like a queen. On Monday, Princess Charlotte adorably sassed photographers outside Prince Louis' christening, commanding the attention of royal fans all over the internet. Sorry, Louis, but it looks like you're going to have to get used to sharing the spotlight.

The second best part of the video? After Princess Charlotte addressed the photographers, Prince William smirked in their direction. Could this have been him showing his subtle approval of his daughter's directness? Was it a forced smile through the awkwardness? Or was it simply a dad reacting to his daughter being funny? Either way, Princess Charlotte totally got away with it.

The sassy moment went down on the family's way from the chapel to a private tea for their guests, Glamour reported.

Perhaps sitting through the ceremony brought out Princess Charlotte's candor, because she was very polite when the day began. In a clip of the family arriving at the chapel, both Princess Charlotte and Prince George shook hands with church officials including The Archbishop of Canterbury, the Most Reverend Justin Welby, who officiated the ceremony, according to the royal website.

Prince Louis was christened on Monday, July 9 at The Chapel Royal, St James’s Palace, London, according to the official royal website. He wore a replica of the Royal Christening Robe — the same replica that both of his older siblings wore for their christenings. Queen Elizabeth II commissioned the robe for Prince George's christening to replace the fragile one that the royal family had been wearing for more than 150 years. Victoria, Princess Royal (Queen Victoria's daughter) was the first to wear the Royal Christening Robe in 1841, and every royal since then (up until 2008) wore the exact same gown, USA Today reported.

And speaking of fashion, Princess Charlotte's dress choice (more likely, the dress her parents chose for her) at Prince Louis's christening seems to be intentional. At first glance, I thought it was the same dress she wore to meet Prince Louis at the hospital the day he was born. Both dresses are white-and-blue floral babydoll styles, but upon further inspection, they are different garments. Perhaps the dress she wore on Monday was meant as a nod to the outfit she wore when she first met her baby brother.

And speaking of that time when Prince William took Prince George and Princess Charlotte to meet Prince Louis in the hospital hours after he was born... Princess Charlotte's adorable sass at the christening was not the first time she has dealt with crowds of photographers in a notable way. When walking from the car into the hospital to meet Prince Louis, the young princess made headlines for adorably waving to the crowd.

She made waves (hehe sorry) again at Prince Harry and Meghan, Duke and Duchess of Sussex's wedding in May.

You know what? Just watch this compilation video of her waving, because honestly, girl knows how to work a crowd.

Hopefully Princess Charlotte and the rest of her family enjoyed their tea, sans photographers.