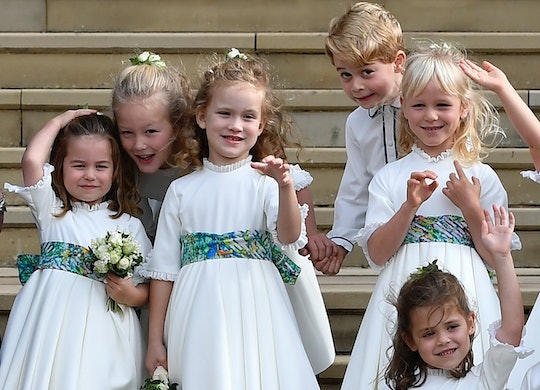 Princess Charlotte might only be three years old, but she has proven herself to be quite the royal-in-training. From her behavior at the many weddings that she has been in over the past year, she has shown that she has what it takes to handle growing up in the public eye. But perhaps this was most apparent in the official portraits from Princess Eugenie's wedding to Jack Brooksbank on Friday.

In the photo, featuring the royal couple and their little helpers from the wedding, Princess Charlotte can be seen sitting down amongst the other eight bridesmaids and page boys. While all of the kids attempt to flash their best smiles, Princess Charlotte looks so composed sitting with her legs crossed and tilted towards the side.

But this is one move that she adopted from her mom, according to People, because Middleton practically invented what some people call the "Duchess Slant." This is exactly what Princess Charlotte did — crossing her legs at the ankles and turning them towards the side, according to Vogue Australia.

The "slant" was "unofficially invented" by Middleton a.k.a the Duchess of Cambridge, after she made the move one of her signature poses for events where she has to sit down for long periods of time, according to PopSugar. The pose is not only super prim and proper, but it also evokes a sense of modesty while wearing dresses, according toVogue Australia. And Princess Charlotte clearly has that move down — just look at that perfect crossing of the ankles.

But this isn't the first time that Princess Charlotte has mimicked a royal either.

The good news is, Princess Charlotte has quite a few years ahead of her before she adopts the same official royal calendar as her mom. And for now, according to the Express, her official appearances are limited to events like weddings and the occasional official family outing (such as the Trooping of the Color or her younger brother's christening).

So, until then, Princess Charlotte can perfect her wave and her "Duchess Slant." But it won't take long for her to do that — her appearance in Princess Eugenie's wedding portraits proved that she is an expert at this kind of thing.