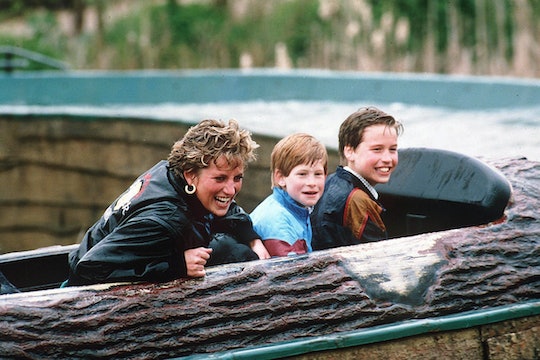 Princess Diana Riding A Log Flume Will Never Not Be Inspiring

We all have the power to do good in the world, but upon seeing Princess Diana riding a log flume — a person who did a great deal of good during her time here — I am possessed only of the selfish desire to also ride a log flume. Because that, my friends, was parenting.

Before the nasty tragedy that ended it all, Princess Diana was the royal who had the most fun, and not in a fancy private-islands-and-polo-matches kind of way. When she wanted to let off steam, she went to the same janky amusement park you or I might have gone to, tinged on the underside with yellow blobs of caulk, the high watermark denoted by a wash of mould. “Diana and the boys went on Loggers Leap, the Teacup Ride, Thunder River, Depth Charge and the Hudson River Rafters,” reports the Mirror of a 1993 outing to Thorpe Park, “a theme park located between the towns of Chertsey and Staines-upon-Thames in Surrey” (if you say so, Wikipedia!). “It's believed the family also visited the two previous Easter holidays in 1991 and 92,” continues the Mirror in the interest of furthering the pursuit of knowledge.

Upon digging into it, I can see now that Princess Diana and her sons Prince William and Prince Harry went on multiple hydraulic river rides in the early ‘90s — the 1993 trip to Thorpe Park gave us Diana and Harry zooming down a water slide on a raft, along with the infamous log flume ride, while a 1994 trip to Alton Towers saw Diana pair a green varsity-style jacket with her shag crop and, yes, ride a log flume.

Imagine, by the way, that the press has an insatiable appetite for you, your outfits, your children, and your answer is not to sequester yourself away, but to have the Greatest Of All Times in full view of the cameras at a dinky theme park frequented by other parents wearing fanny packs and day-glo baseball hats. Try and appreciate the perspective Diana had at the apex of Loggers Leap, about to plunge two storeys into a puddle while screaming joyously into her sons’ ears, every camera in the nation pointed at her. Brilliant.

Loggers Leap, which had a Canadian theme, blasted “Cotton Eyed Joe” by Rednex, along with other “dancy” country-and-Western hits over the speakers, and Princess Diana rode it multiple times, making her more intercontinental than Meghan Markle. Yes, Catherine, Duchess of Cambridge, may have gone rowing in Canada, but if she were to ride an actual log flume in a varsity jacket no less I think we can agree we’d all lose it.

While the high point of my childhood was leaping off my dad’s hairy shoulders in the swimming pool, Princess Diana zooming down a procession of just-concealed rollers to a splash landing, beaming with surprise as the water hits her face, captures what I imagine to be peak parenting. The cartoonish fiber-glass log with its fiber-glass “bark” finish, and three royals sitting inside like chipmunks off on a tiny adventure — I can’t think of any more joyous representation of humanity, of family; can detect no greater commentary on the obsolescence of the monarchy following the uproar over the 1992 separation of Diana and Prince Charles. That Diana chose to wear a Hard Rock Cafe bomber jacket on one of her flume outings is enough to convince me that she was a much greater master of discourse than anyone recognized. The whole thing is, as the Mirror might agree, very metal.

A few years ago, it occurred to me to wonder why we only hear about log flumes, and never any other time of flume. The answer is that a flume is an “artificial channel conveying water, typically used for transporting logs or timber,” and so while you might find the occasional rock or seed pod making its way down the mighty waters of life, the thing you’re generally most likely to spy splashing through a ravine is a log, or a royal.

After her death, Princess Diana was honored with a plaque at the base of Loggers Leap in Thorpe Park. It was announced earlier this year that the ride would be sold at auction in May, prompting the relocation of that plaque, and a wave of outpourings on Twitter — the end of an era. We may continue to float off the edge of the world and come bobbing back to our own bodies in log flumes elsewhere, but today my eyes are full of the splashback from this particular memory.

More Like This
25 Mother And Daughter Halloween Costume Ideas That Are Cute And Spooky
This Is What It’s Like To Parent With OCD Right Now
Prince George Reportedly Got Sassy In A Fight With A Classmate
Exclusive: Watch Hayden Panettiere Talk About Addiction Treatment 4 Months Postpartum