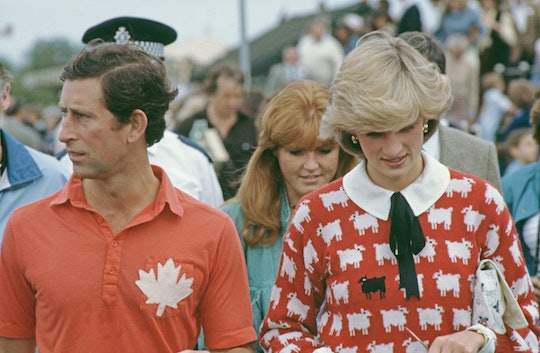 A unique sweater from one of history's most timeless fashion icons is available once more for the first time in decades, and it's already flying off the shelves. Princess Diana's sheep sweater is on sale again, and fans are flocking to grab it up ASAP. The bright and quirky print has a little edge to it, and that may be why it's still such a cool bit of fashion lore all these years later.

First sold by the company Warm and Wonderful, the black sheep sweater rose to popularity when Princess Diana started wearing it in the early '80s. The subtle but pointed print, featuring one black sheep against a herd of its snowy-coated peers, may have hinted at Diana's feelings regarding her position in the Royal Family. At any rate, the sweater gained enough fame to warrant its inclusion in the Victoria and Albert Museum. Now available for purchase again for the first time since 1994, the wool sweater is available in men's and women's cuts from Rowing Blazers for $295, and several sizes have already sold out.

At this often strange moment in history, Diana's quietly subversive fashion stylings feel on-point and relevant again. In a 1995 interview with BBC1 Panorama, Diana said, "I'd like to be a queen of people's hearts, in people's hearts, but I don't see myself being Queen of this country. I don't think many people will want me to be Queen . . . Because I do things differently, because I don't go by a rule book, because I lead from the heart, not the head, and albeit that's got me into trouble in my work, I understand that. But someone's got to go out there and love people and show it."

The princess's idea of prioritizing love and showing a bit of humanity is just what anyone slogging through the confusion that is 2020 needs. And no, you don't need a cute sweater to channel this positive energy, but it can't hurt.