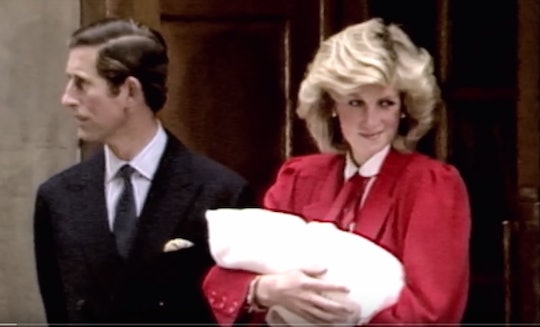 The world was heartbroken when Princess Diana tragically died in a car accident back in 1997 — leaving her two young sons motherless. She was beloved and mourned by everyone. Even now that Prince William and Prince Henry are grown and have families of their own, royal fans continue to keep her spirit alive. Especially when it comes to royal fashion. (Yes, her style was that epic.) And Princess Diana's most iconic looks are the ones that royals can't stop copying.

Is it just me, or does it seems like every time a major royal event goes down, entertainment news publications are comparing Meghan Markle's or Kate Middleton's fashion choices to that of the late Princess Diana? Sometimes, I wonder if these observations are a bit of a stretch. But there have been plenty of occasions during which the similarities are undeniable; the duchess must have been "channeling" the mother-in-law she never met.

With this in mind, Princess Diana did have a few iconic fashion moments — for one reason or another — that have never been replicated by anyone else in the royal family. So let's take a look at some of the Duchess of Wales' most memorable looks. Such as ...

One of Princess Diana's most epic looks of all time was her wedding dress. In 1981, she married Prince Charles wearing the dress above. The ballgown was created by David and Elizabeth Emanuel, according to Marie Claire. It featured layers of silk taffeta, puffy sleeves, a train that measured 25 feet, and 10,000 pearls.

As Harper's Bazaar reported, Princess Diana wore a white suit by Catherine Walker with a white cap in April 1987. (Pictured above.) The Princess of Wales donned this outfit during a visit to the Sandhurst Military Academy, according to the publication.

And it seemed Meghan Markle took inspiration from this look when she wore a similar white suit and cap for Commonwealth Day in March 2019 — when she was still pregnant with Archie.

The Red Dress She Wore To Introduce Prince Harry

After giving birth to Prince Harry in 1984, Princess Diana stepped out for the first time in front of the Lindo Wing at St. Mary's Hospital. To introduce her newborn son to the world, Diana wore a red blazer dress with a white collar.

Lo and behold, Kate Middleton channeled this look when she introduced Prince Louis in 2018, according to ET Online. It's a keeper, for sure.

In October 1985, Princess Diana was photographed in her sitting room at Kensington Palace wearing a polk dot dress with a large, white collar, according to Hello! magazine. For Prince Charles' 70th birthday portrait — released in November 2018 — Kate Middleton wore a a strikingly similar polka dot dress by Alessandra Rich, which also featured a prominent white collar. Coincidence? I think not.

Diana wore this black, off-the-shoulder dress and choker in June 1994 to the Serpentine Gallery in London, according to HuffPost. The thing is, it happened to be the same night a documentary aired during which Prince Charles confessed cheating on her with Camilla Parker Bowles. Meaning the dress was widely interpreted as a "look what your'e missing" message to her cheating husband. It's worth noting that it doesn't seem this look has been copied by a royal so far.

I suppose it was just that iconic.