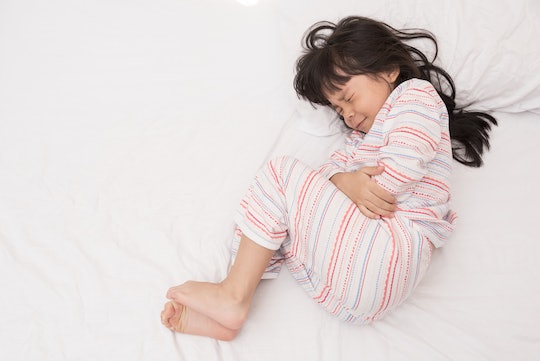 Probiotics May Not Be Helping Kids With Stomach Bugs, According To New Study

There's few things worse than having sick kids; it can be hard to watch as a kid is coping with any kind of stomach bug and all of its associated symptoms. It's understandable that parents will try medications and other supplements to try to give their kids some relief. According to a new study, though, probiotics may not be helping kids with stomach bugs. In fact, some doctors believe that the costs may outweigh the benefits.

When people talk about the stomach bug (or flu), they're usually referring to viral gastroenteritis. This intestinal infection is characterized by symptoms like watery diarrhea, abdominal cramping, nausea or vomiting, and occasionally even fever, according to the Mayo Clinic.

That's obviously not pleasant for anybody, but especially not for kids, which can make things difficult on parents and caregivers as well. According to Live Science, gastroenteritis accounts for about 1.7 million pediatric emergency room visits in the United States every year. Recently, some people have wondered if probiotics could help fight a stomach bug in kids and help ease some of those painful and miserable symptoms.

Assuming that some good gut bacteria can make the stomach bug go away might make sense to some, but research is showing that just might not be true.

A study published in the New England Journal of Medicine looked into whether treating acute gastroenteritis in kids with probiotics actually had any benefit. Nearly 1,000 kids with gastroenteritis in 10 U.S. hospital emergency departments were randomly assigned to receive either the probiotic Lactobacillus rhamnosus GG (LGG) or a placebo for five days, according to the study's abstract.

The kids were all between 3 months and 4 years old, according to the study's abstract. At the end, researchers reported that those given the probiotic did not have better outcomes than children using the placebo.

In a statement, Dr. David Schnadower, who led the study, said, "Because of the popularity of probiotics, it was important to make sure their use is worth the cost. In this instance, probiotics added no measurable benefit and, therefore, they are not worth the added cost."

In addition to the U.S. study, a similar one in Canada evaluated the effectiveness of a different probiotic, Lacidofil, in children with gastroenteritis. The findings of that study mirrored the results found in the United States.

"In children who presented to the emergency department with gastroenteritis, twice-daily administration of a combined L. rhamnosus–L. helveticus probiotic did not prevent the development of moderate-to-severe gastroenteritis within 14 days after enrollment," the researchers concluded in the study's abstract.

So, what can you do for a stomach bug?

There's no effective treatment, according to the Mayo Clinic, but most symptoms are mild and fade after a few days. The most important thing is prevention, like making sure to wash your hands, avoiding foods or drinks that might cause you to develop the virus, and disinfecting hard surfaces if anyone in your house develops the virus.