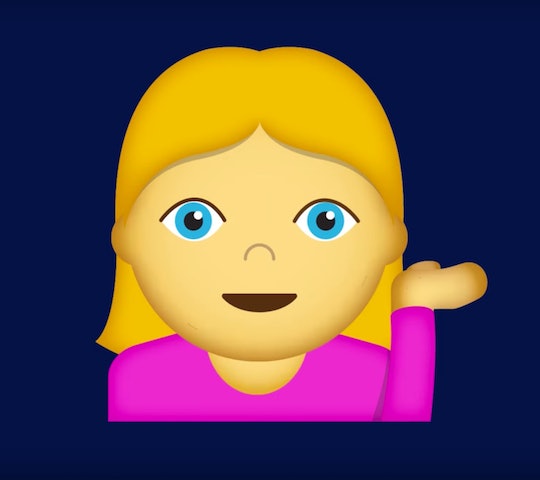 Professional Emoji Women Could Soon Be A Reality, & It's Seriously Time

For tiny digital images with the primary purpose of adorning texts among teenagers and twenty-somethings, emojis have become quite the cultural phenomenon — as well as somewhat of a flashpoint. The emoji keyboard includes everything from a pile of poop with eyes to the Japanese flag to a single egg in a frying pan, sunny side up. Since its American inception, the emojiverse has been diversified to include same-sex couples and expanded skin tone options for emoji people. Still, "it's a bit of an eggplant fest," as comedian Stephen Colbert recently quipped, because emoji women are severely underrepresented in active roles, compared to their male counterparts. A recent proposal from Google aims to rectify that, and so professional emoji women could soon be a reality, finally.

In a recent New York Times op-ed, Amy Butcher laments the lack of women emojis doing anything much besides getting married and, somewhat inexplicably, flamenco dancing. And in March, a video ad by the feminine hygiene product brand Always showcased girls' frustrations that while the emoji landscape clearly depicts guys as both physically active and professionally successful, the females are shunted almost exclusively to anything involving pink. In response, a team from Google this week proposed introducing 13 working women emojis, like scientists, doctors, educators, and even farmers. ‌

"Our proposal is to create a new set of emoji that represents a wide range of professions for women and men with a goal of highlighting the diversity of women’s careers and empowering girls everywhere," the proposal, presented at the Unicode Consortium, states.

The complaint about underrepresentation of women and girls in emojis is nothing new. Noting that sexual assault, pay inequality, and access to reproductive services are certainly more pressing feminist issues, Sophie Kleeman wrote about why it still matters for Mic in December:

The lack of emoji options for the working woman is worth examining because it's a small yet clear example of a social scheme that still manages to reinforce traditional gender stereotypes at every turn — even when the issue is as seemingly innocuous as a tiny digital face.‌

And considering how often we use emojis, women and girls confront these stereotypes over and over and over again. According to the Google proposal, 78 percent of women frequently use emojis, compared to 60 percent of men. Unfortunately, that does not mean the process of working-women emoji approval and implementation will be accelerated, or even guaranteed. The New York Times reported that getting new emojis onto smartphone keyboards is a multi-step process that invites many opportunities for new designs to undergo changes or even be scrapped.

It's pretty cool, though, that the four-person Google team that introduced the potential new emojis to the world analyzed real-life information from sources like the Bureau of Labor and Statistics in order to ensure that the emojis reflected women's actual experiences, showing that most of us aren't pairing up and parading around as twin Playboy Bunnies. I'm also impressed at the team's response to cultural criticism of the current flat aspect of the female emojis — even if it did, at least in part, require some input from such a high-profile figure as Michelle Obama, whose response to the Always ad is noted in the Google proposal.

The Google team wants to have the emojis standardized by the end of the year, and I'm certainly cheering them on. While many professional women likely know they have the potential to succeed in fields like technology and healthcare, the message could get muddled for a younger generation growing up with iPhones in hand. Colbert facetiously mused on The Late Show With Stephen Colbert this week that perhaps a woman is piloting the rocket ship emoji, or that maybe the ghost emoji used to be a woman. But women are just as awesome and capable as men, and I think that should be clearly evident in the real world and the emoji universe alike. [Insert emoji of badass woman bravely breaking down gender stereotypes here.]