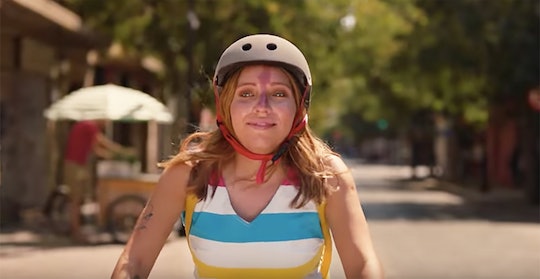 Stock images, aka photos used for marketing purposes or commercial projects, don't tend to be inclusive of all women. The good news? Dove's project #ShowUs aims to change how women are featured in the media, and with the help of Getty Images and the organization Girlgaze, the company has knocked this important mission out of the park.

If you stop to think about stock images for a second, you quickly realize that these photos are everywhere. From billboards to medical brochures, stock images dominate the world's visual landscape. And since these photos are everywhere, they can shape how people view beauty and their own self-worth. The images companies choose tell consumers — whether directly or indirectly — what's attractive, what's so-called "normal," and what's deserving of your time and money.

Think about it: When's the last time you saw a person with disabilities featured in a run-of-the-mill ad campaign? How many trans people are featured in advertising pamphlets? I could list a billion other examples, but there's a clear lack of inclusive stock images.

To address this problem, Dove partnered up wit Girlgaze, a "diverse community of non-binary and female-identifying creatives," and Getty Images, "one of the world’s leading creators and distributors of imagery," according to its website. The end result? #ShowUs has come up with "5000 images across 39 countries portraying a range of different ages, races, shapes, sizes, gender expressions and other self-identified descriptors," according to Dove. Amen.

What's especially incredible about this project? It didn't use "staged sets," "digital distortion," and every woman got to decide how she wanted to be seen.

The global vice-president of Dove, Sophie Galvani, touched on the need for these inclusive images, stating, according to PR Week: "Our research, which is one of the largest global studies of its kind, has shown that every day women’s lives are affected by these limitations, exclusions and stereotypes. It affects their health, relationships and the opportunities they are given."

She added: "Women who feel worse about themselves as a result of seeing a narrow definition of beauty day in, day out, have told us that it is impacting their daily lives."

Dove found that the lack of diverse images have caused women to feel 30 percent feeling less assertive, while 49 percent are not wearing the clothes they want and 37 percent are not expressing their true identity.

It goes without saying these stats aren't OK — all people deserve to feel confident and seen. To achieve this, Dove has opened up the campaign to anyone who wants to submit a personal photo. The company brought up this amazing detail when one person mentioned that they have a "lazy eye."

"I have a lazy eye, and I feel like people who suffer from the same thing get almost no exposure," the person wrote. "I’d love to see ONE beauty campaign include one of us so we know we’re not alone.

Dove wrote back: "You are beautiful, Gianna, and we want you to help us expand the definition of beauty! #ShowUs more women like you by sharing your photo for a chance to be a part of our Project #ShowUs photo collection."

You can submit your own photo on Dove's website if you wish, but everyone can take part in this effort by calling for other companies to invest in inclusive images. Change has to start somewhere, folks.

More Like This
I Found Gender Euphoria In My Second Pregnancy
Here's Why 'Mean Girls' Is A Fetch Movie Choice For Families With Teens
The Summer I Turned Pretty Is Officially Returning For Season 2
'Clueless' Is, Like, Totally Still A Good Teen Movie In 2022