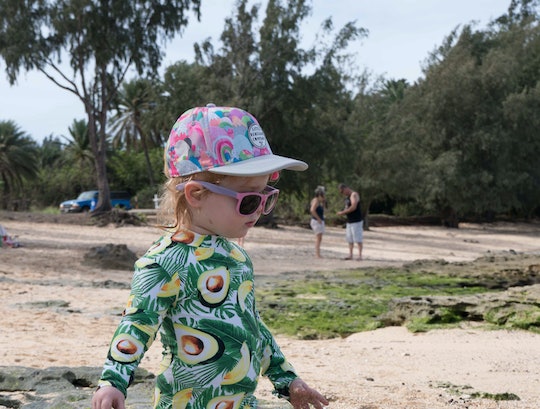 Mine are the kids in the dinosaur UPF hats, sunglasses, and long-sleeved sun-protective tops rubbing a sunscreen stick on their chin until it turns white. I want to protect my kids from the sun, as a mom who has already dabbled in skin cancer, but as a country, we are way behind.

We know that we need to keep our children safe from the sun, and yet when I look around on any given day, I see kids everywhere hatless, sunscreenless, tearing about outside in peak UV hours. Myths about the sun abound. A friend once told me that babies under six months of age don't need sunscreen because they are naturally sun-protected (Wrong! They are very vulnerable, and while there are concerns about using sunscreen on infants, some organizations suggest limited use is OK and indeed preferable to sun exposure). If we can get sun protection right for our kids, we can make a real difference: about 23 percent of lifetime exposure occurs by age 18, according to the Skin Cancer Foundation.

"From the photo-aging sun-damage perspective, we can always make a change," Dr. Elizabeth Hale, a dermatologist who specializes in skin cancer, tells me, but "you can really prevent [sun damage] during childhood."

Hale has teamed up with Coppertone and 4-H, the country's largest youth development organization, to launch a campaign, Protect What Matters Most, to educate kids on the importance of sunsmart behaviors. It dovetails with Melanoma Monday and the month of May, which has been deemed Skin Cancer Awareness Month.

Many parents are, like me, devoted to chasing their children around with a bottle of sunscreen and arguing with their toddlers, "You must wear your hat! You don't have a choice!" in an attempt to ward off the mistakes we made as kids. But, says, Hale, "they learn the most from modeling our behavior as adults"

So if mom and dad aren't religiously protecting their skin — reapplying sunscreen, wearing UPF clothing and sunglasses, and keeping out of the sun in peak hours — their kids aren't going to absorb the message.

"I really see it already in my children," says Hale. "They know I put sunscreen on every day, even when it's raining and snowing, they know now, mom uses it every day."

For that reason, I have bought multiple matching UPF outfits for me and my kids, most notably the ridiculously cool avocado swimmers from Mott50, pictured above. If I'm going to model a behavior, I figured, I might as well be twinning doing it.

Hale says that she has an easier time educating her female patients about using a high-SPF sunscreen daily than men, because putting product on their face is already part of their routine. Likewise, she explains, women tend to have skin cancers detected earlier thanks to routine skin checks (look around your dermatologist's office, and chances are it's full of young skin-savvy women).

Hale is therefore invested in "teaching young girls and boys that it's not about their gender." If we teach them about sunscreen young, when they're playing with pretend makeup (this is my son's favorite toy), we can engrain that behavior.

In my home country, Australia, there has actually been a decline in the rate of invasive melanoma, thanks to a massive public education campaign started in the '80s. There, schools require children to wear wide-brimmed hats to play outside, and playgrounds and pools are covered with shade canopies.

Living in the U.S., I'm often struck simply by the absence of shade. Of the blasé reaction to powerful UV (am I the only parent with a UV Index app on my phone? It feels as though I am!). Of the fact that many parents are unaware that a cotton t-shirt only reduces UV exposure by 5 percent. That's why I have bought UPF (the UV protection rating system for fabric) clothing for my kids as well as myself — and not just for swimming.

I swear by our matching Patagonia Tropic Comfort hoodies, which are designed for day use in the sun (as a customer wrote in their review: "Best part of this piece is reducing the sun screen application freak out."). And for in the pool or at the beach, brands like Snapper Rock and Coolibar (New Zealand and Australian-owned brands, respectively) have lots of UPF options for good tot coverage.

Attempts to change sun behaviors will have to extend to schools and daycares if we are going to halt the rise in skin cancers here (nonmelanoma skin cancers rose by 77 percent in the U.S. between 1994 and 2014, per the Skin Cancer Foundation).

Mary Ellen Maguire-Eisen, founder of the Children's Melanoma Prevention Foundation, tells Romper by email that "teachers as well as most adults don’t realize that skin cancer is the most common cancer in many countries," and may need to be educated. A fact sheet on skin cancer prevention in schools from the CDC recommends teachers "emphasize the importance of embracing your natural skin color," rather than a tan. The foundation is partnering with Snapper Rock to promote awareness of sun safety.

Maguire-Eisen also notes that while many parents and teachers associate a hot August with the highest risk of sun damage, "UV intensity peaks during the Summer Solstice." That means that in the U.S., the "risk for sunburn is higher on average in May than in August." She advocates getting an app that tells you the UV index and can also provide alerts to reapply sunscreen.

But keeping your kids out of the sun is the most effective way to reduce their exposure. Maguire-Eisen notes that side-car windows allow UVA light to pass through, and says "parents also need to think about reflected light because babies under beach umbrellas sometimes become overexposed to the sun."

I was careful as a child and young adult, but not careful enough. My story is that, prior to having kids, four years ago, I had a mole on my scalp re-checked for the third time by a dermatologist after it started acting strangely. Lo and behold, it was a basal cell skin cancer. I had Mohs surgery to remove it, culminating in 10 staples through my hairline. Now I have skin checks every six months, and am very, very diligent about covering up, keeping out of the sun, and applying a broad-spectrum sunscreen to myself and to my kids.

My kids happily wear their hats, having had their willpower worn down over time, and like to try and apply sunscreen whenever I apply mine. We have a variety of foams, sticks, and lotions in the house, car, and diaper bag on the theory that the best sunscreen for a child is the one you can get onto them.

In our matching UPF tops and hats, I'm engraining sun-protective behaviors that will stay with them through life — and that's a very sunny thought.

More Like This
From Captions To Gifts, These Are All The Kindergarten Graduation Ideas You Need
Abbot's Formula-Producing Plant Can Reopen In As Early As 2 Weeks — Now What?
Can You Help Your Baby’s Hair Grow?
Adult Gymnastics Brought Me Back To Myself