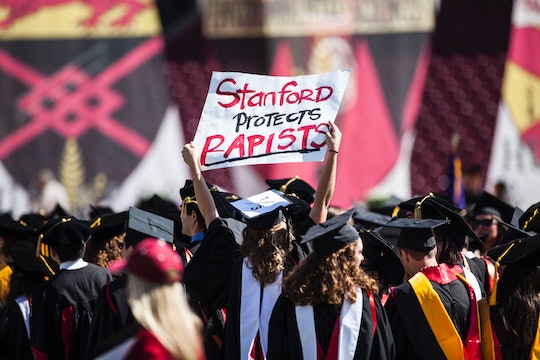 After three months in jail, Brock Turner was released last week and it sparked outrage across the internet. The former Stanford student made headlines earlier this year when he was accused of sexually assaulting a young woman on campus. He was convicted of the crime, but the media has been reluctant to label him as a rapist due to the language of the felonies he was ultimately charged with. Now that he's been released, protestors outside Brock Turner's home show just how angry people are that he's free.

Turner was originally charged with five felony counts, which were ultimately reduced to three. The counts — assault with intent to commit rape of an intoxicated or unconscious person, sexual penetration of an intoxicated person and sexual penetration of an unconscious person — could have easily landed him in jail for 10 years, but he was sentenced to just six months in prison and was released after serving just three. Turner's representative declined comment regarding the claim that Turner's sentence was especially lenient.

The outrage over Turner's case began with his sentencing back in June, which many believed was too light and a prime example of white privilege, according to New York magazine. The media has continued to fuel the fire by being reluctant to call Turner a rapist in headlines — something it won't do out of fear of libel. Turner was convicted on charges related to sexual assault, but was not charged or convicted of rape. The two charges related to rape in his case — rape of an intoxicated person and rape of an unconscious person — were dropped at a preliminary hearing, according to the Santa Clara County District Attorney’s Office.

Stanford students have also been engaged in ongoing protests against not just Turner, a former student, but the institution itself, which they believe protected Turner rather than his victim. Back in June, many students protested during the university's commencement ceremony.

Turner's victim, whose name has not been released, provided a powerful statement in court that brought the case to the forefront of social media after the attack earlier this year. Many who stand in solidarity with the young woman have taken to the internet — or even to the property surrounding Turner's home in Ohio— to protest not just his act of violence, but the responses by Stanford University and the state of California, which many believe were too lenient and in favor of Turner.

As of Tuesday morning, Brock Turner is listed as a registered sex offender in the state of Ohio, where he currently resides.