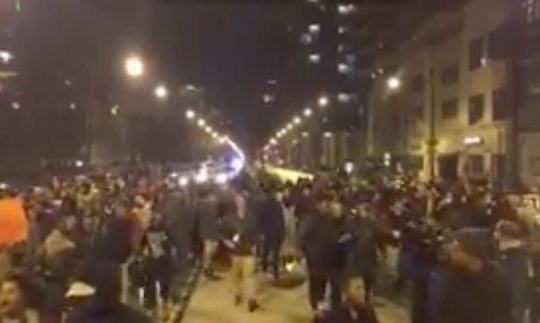 After the video of Laquan McDonald’s death was released to media tonight, the streets of Chicago filled up. And it looks like protests about McDonald’s death won’t end soon. McDonald’s shooting was in October 2014, and many were frustrated that it took a judge’s order to release the video of his shooting Tuesday. Supporters took to the streets chanting “16 shots!” after the released video showed McDonald being shot 16 times while running away from police officers. McDonald had a small knife in his hand when he attempted to avoid armed officers, according to the video. Officer James Van Dyke, who turned himself in Tuesday morning, was charged with first degree murder.

While many deemed the video too gruesome to watch, authorities handed it over to the media around 6:30 p.m. ET and Chicagoans had already taken to the streets. Upon releasing the video, Mayor Rahm Emannuel told the press that the video was “disturbing.” He gave a press conference anticipating protests.

The shooting of Laquan McDonald echoes that of Michael Brown in Ferguson in August of 2014. Chicago Mayor Rahm Emmanuel and Police Superintendent Garry McCarthy were more than aware of that during their press conference. Community leader Rev. Roosevelt Watkins of Pastors United for Change, told NBC News, “Chicago is on the tipping point. We can be just like Ferguson.”

So far, videos and photos from the scene show a very charged atmosphere in Chicago, with protestors blocking the expressway and police threatening to arrest those who didn't evacuate:

Following McDonald's tragic and senseless death, it's unsurprising that citizens took to the streets. Let's hope that their voices get heard without further violence.

More Like This
Robb Elementary School Is Set To Be Demolished After Deadly Shooting
What Exactly Are Minions, Anyway ?
Family Of Grandfather Killed In Highland Park Mass Shooting Say He "Saved" Their Lives
Megan Fox Explains Why She Asked Machine Gun Kelly If He Was Breastfed As A Baby