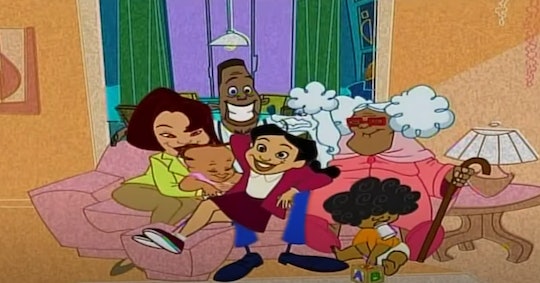 Penny Proud, Oscar, BeBe and CeCe and even Suga Mama are all making a comeback on the Proud Family reboot on Disney+. And what's more, the upcoming series is also introducing a brand new badass character: Keke Palmer as a teen activist.

Palmer — a Disney alum who starred in the Disney Channel original movie Jump In! — will make her way to Disney+ where she will lend her voice to the upcoming Proud Family reboot, The Proud Family: Louder And Prouder.

"There's a new girl coming to town!" Disney+ announced on Twitter on Aug. 6. "Prepare to fall in love with 14-year-old activist Maya Leibowitz-Jenkins, voiced by Keke Palmer, from the upcoming original series, The Proud Family: Louder And Prouder, coming soon to Disney+."

Disney's concept art for the character shows Maya wearing ripped jeans, a green jacket, and raising her clenched fist, aka "the global symbol for fighting oppression," according to National Geographic. Maya's character is "extremely mature for her age," according to Entertainment Weekly, and "relentlessly marches to the beat of her own drum."

As for Palmer — an 26-year-old actress perhaps best known for her roles in Scream Queens and True Jackson, VP — she seems especially excited about her new role. "DREAMS COME TRUE," she tweeted in response to Disney+.

In addition to Palmer's character, The Proud Family: Louder And Prouder will reunite the original voice cast from the series, which aired on The Disney Channel between 2001 and 2005, according to Deadline. The reboot will continue to tell the story of Penny Proud, her eccentric family, and her funny friends, but there will also be new characters in the mix, like Maya.

The OG series' creator and executive producer Bruce W. Smith is returning for the series along with executive producer Ralph Farquhar. "In our minds, the show never really went away, as we still had tons of stories to tell," Smith and Farquhar told Deadline in February. "It's the perfect time to bring back this show, and we can't wait to take fans, old and new alike, on this journey with us."

The official release date for The Proud Family: Louder And Prouder has not yet been announced. But, don't worry, until it airs you watch Seasons 1 and 2 of The Proud Family on Disney+ right now.