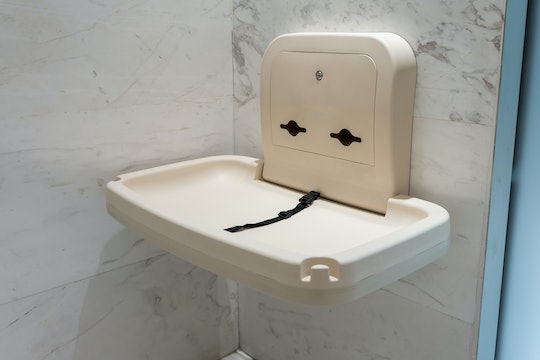 Why Public Changing Tables With Black Scuff Marks May Be Unsafe

Jessica Wayman, a 24-year-old mom from Fairland, Indiana, shared a photo of a changing table in a public bathroom on Facebook earlier this week, Scary Mommy reported. Alongside the picture, which shows distinct black scuff marks on the table, Wayman shared a PSA. "Before putting your babies anywhere near these things, ALWAYS wipe them down first. Even if you are in a hurry, even if you have a blanket to lay down," she wrote. "See the black marks? Those are from burnt spoons. Addicts use these as tables while they shoot up. There could be residue from heroin/meth whatever, and other harmful bodily fluids. If someone doesn’t care about themselves, I can promise you, they aren’t thinking about your kids. Be cautious."

She added a request for people to share the post, so that as many caregivers as possible could learn about this.

Over the course of the week, Wayman's post went viral, racking up more than 17,000 reactions and 143,000 shares on Facebook. As it continued to grow, Wayman edited her post to clarify a few things that people she saw people questioning. She explained that the changing tables where one should look out for black marks are located in handicapped stalls or single-person restrooms, because drug users could use those rooms privately. "Along with people using them as tables while they shoot up, they are also OFTEN used by addicts to bust drugs out and crush them up upon," she wrote.

Wayman also disclosed how she knew exactly what the black marks were. She wrote:

I am a recovering addict myself, which is why I made this post in the first place, to warn all the unsuspecting parents who would never think something like this when looking at a changing table.

Sharing something like this isn't easy, and it was really brave and powerful of Wayman to put that information out there in hopes of helping other parents.

She also spoke with the Daily Mail, where she explained exactly how a changing table that has drug residue on it could put a baby at risk. "All it would take is flakes getting stuck to a blanket, and the baby later putting the blanket in their mouth," Wayman told the outlet. "Especially with all the Fentanyl out there right now, it takes a tiny amount to kill a full grown adult, it would take even less to kill a tiny baby."

As explained by the United States  Drug Enforcement Administration, Fentanyl is an extremely strong opioid that was created to treat cancer patients by applying it to the skin via a patch. Fentanyl is typically added to heroin to increase the strength of the drug, so if someone used a changing table to inject heroin, trace amounts of Fentanyl could still be present, the DEA added.

Linda Richter, the National Center on Addiction and Substance Abuse's director of policy research and analysis, explained Fentanyl's dangers to WebMD. “It only takes a tiny amount of the drug to cause a deadly reaction,” Richter told the website earlier this year. “Fentanyl can depress breathing and lead to death. The risk of overdose is high with Fentanyl.”

So for caregivers who are often on-the-go with a baby, make sure to always inspect and thoroughly clean changing tables before use.