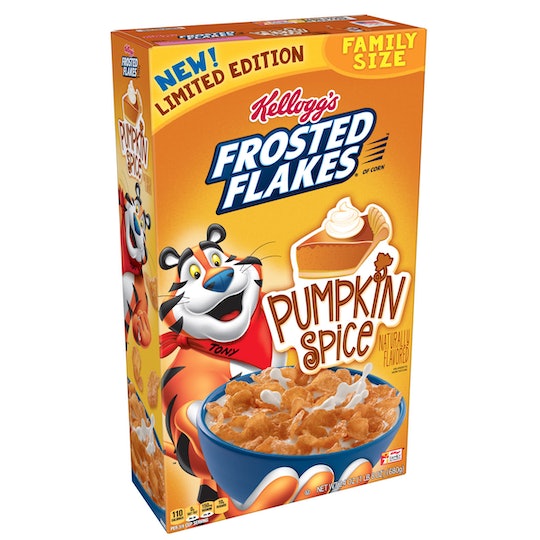 Pumpkin Spice Frosted Flakes Are Back, & They're Flying Off The Shelves

Summer is winding down, and that means one thing — the pumpkin spice invasion is coming. The latest fall-flavored treat to arrive back in stores for autumn is pumpkin spice Frosted Flakes, so you can get your pumpkin spice craving satisfied before you even get out of your pajamas.

The sweet cereal debuted last year, according to Brit.co, and apparently they were popular enough to bring back this year. As far as I can tell, there's no actual pumpkin in the cereal. It gets its autumn-y goodness from cinnamon, ginger, nutmeg, and allspice. The sugary treat is apparently so popular that it's out-of-stock on Walmart.com as of this writing, but there should be plenty of other places to snap it up as it makes its way into stores.

But is this stuff actually worth buying, or it just one more fall gimmick? The blog Cerealously gave it a good review, though noted that the pumpkin spice flavor could have been stronger. Blogger Mr. Breakfast, meanwhile, thought the subtle pumpkin spice flavor worked well, especially if you're already a fan of regular Frosted Flakes.

If you can't get your hands on pumpkin spice Frosted Flakes right away, don't worry — there are lots (and I do mean lots) of pumpkin-flavored alternatives on the market right now. Among cereals alone, you can get Cheerios, Life, Special K, Frosted Mini Wheats.... the list goes on and on. They're all limited editions, though, so don't wait to buy a couple boxes if you just can't imagine eating anything else for breakfast all autumn long.

Of course, I couldn't possibly write about pumpkin spice anything without mentioning the drink that seems to have kick-started its popularity, the Starbucks pumpkin spice latte (also known as the PSL). The PSL should be arriving in a matter of weeks, according to Bustle. While the release date hasn't been announced just yet, past history indicates it'll most likely be available around the last week of August or first week of September. Just imagine, in a month or so you could potentially be washing down your pumpkin spice cereal with a PSL and busting out your favorite sweater for the cool fall weather.

Whether pumpkin spice Frosted Flakes is your breakfast of champions or just a quick snack, it might make you hungry for even more pumpkin spice deliciousness. If that's the case, your options are pretty much endless. It remains to be seen whether they'll all return to stores this fall, but in the past we've seen offerings like pumpkin spice Oreos, yogurt, ice cream, granola bars, and even cream cheese, according to Eater.

One thing you definitely can't get is pumpkin spice toothpaste, despite what you may have seen on the internet. That was just a hoax, according to Buzzfeed. Ditto for pumpkin spice tampons, condoms, and toilet paper (thankfully).

I can assure you that pumpkin spice Frosted Flakes, however, are very much real. I'll leave it up to you to decide whether they're grrrrreat (because I just couldn't end this article without a Tony the Tiger joke).