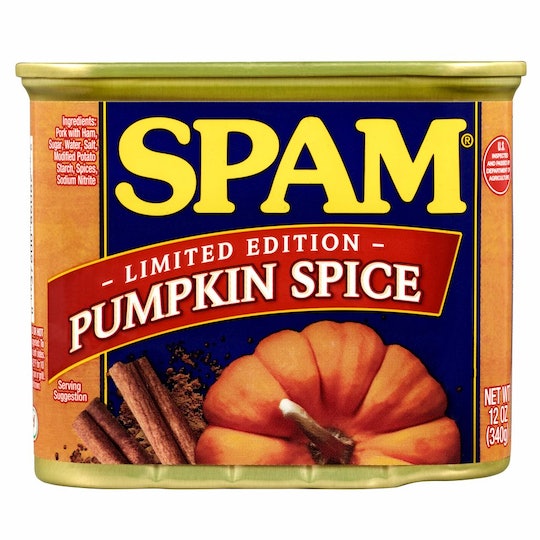 Guys, We Have To Talk About This Pumpkin Spice Spam

I am not going to lie. Come the end of August, my whole house smells like cardamom and cinnamon, I wear a witch's hat around the house full time, and my leggings are pulled from their summer hideaway to once again cover my basic behind. I pre-order my PSL before I drop my kids off at school, and maybe get another at pick-up. There is no such thing as too much pumpkin spice in my life, but I'll admit, I was thrown by the idea of pumpkin spice Spam. Although, TBH, I don't hate the idea. Hear me out.

So a few years ago, the makers of Spam made a joking mock-up of a pumpkin spice product that got a lot of media attention. Much jesting was had. "Oh, you. You really got us with the pumpkin spice canned pork product!" Hilarity was shared by all. Apparently, enough so that it actually got made, and the people at The Daily Mail got to taste it. (I'm only slightly put-off by the fact no one thought to send me a tin.) They compare it to breakfast sausage — which makes a lot of sense. Consider all the slightly sweet, spiced sausage you've had in your life. The flavors in pumpkin spice might mirror that, which is actually pretty neat.

And according to The Daily Mail, you can buy it for yourself online at Spam.com and Walmart.com starting Sept. 23.

A lot of people are put off by Spam, which rose to fame in World War II era when easy refrigeration wasn't available, and GIs still needed reliable protein. In stepped the Hormel corporation, who had created this canned pork product a decade before the war, according to Eater. Since then, it's mostly taken a back seat to traditional meat products, but remains popular in Hawaii, Hong Kong, and other parts of the world. And it's honestly not bad. Spam and eggs over noodles is one of my favorite Hong Kong style breakfasts available all over my neighborhood in Brooklyn, and my kids are particularly fond of Spam musubi — a rice and seaweed sushi-style dish.

Pumpkin spice spam sounds intriguing to me, because all of my favorite curry flavors are also present in pumpkin spice, so I think it might be quite nice cubed up in a coconut curry soup, or in a chickpea masala. You could also dice it really finely and toss it with some white rice, pouring curry sauce over top and adding some poached eggs.

If you want to go more sweet with your pumpkin spice Spam, I'd suggest slicing it really thin, and using it in place of sliced ham in a croque monsieur.

Laugh at the pumpkin spice spam all you want, but when the zombie apocalypse finally arrives, you're going to want to keep my recipes in your back pocket when all you have is tinned curry sauce, rice, and this spam. If you get lucky, you might have a few chickens running around for eggs, but that's in no way a guarantee in the apocalypse.

The question remains: has pumpkin spice finally jumped the shark? Probably. When you're seeing jokes for pumpkin spice tampons and real life pumpkin spice sexual lubricant, it's pretty safe to say the trend has gone in a direction from which it can never return. But just because it's rife for pranks and jokes doesn't mean that the original PSL is any less wonderful, or that pumpkin spiced candles should not be lit from August to November. It just means that people like me have to deal with a healthy amount of ribbing from people who don't understand our deep and abiding love of sweet gourd flavored goodness.

More Like This
Moms, Just Eat The Fruit Dammit
Deb Perelman Could Do This Forever
Meal Prep Sucks The Fun Out Of Food
My Parents Never Taught Me To Cook So I'd Always Need Them