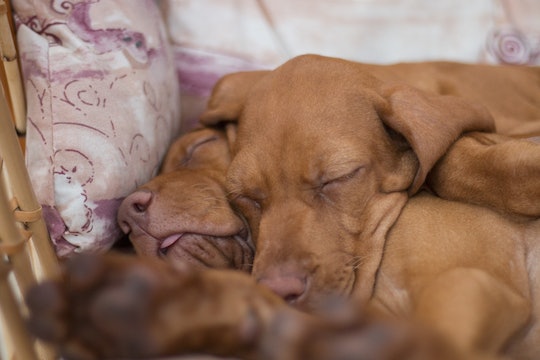 What's better than a puppy? Playing with a puppy, snuggling with a puppy, telling a puppy all your deepest and darkest secrets because he'll always love you no matter what. But there can be a more... unfortunate side to puppies as well, as a big group of people who've come into contact with some of them recently learned. While they're probably as excited to see you as any pet can be, puppies from Petland are reportedly giving people diarrhea because of an antibiotic-resistant bacteria they carry. So far, the Centers for Disease Control has identified 55 cases of puppy-induced (sorry) Campylobacter infections in 12 states. The good news is that you're likely to fully recover if you come down with the infection, but the bad news is that, well, you likely picked it up from puppy poop.

Here's how it works, generally: Let's say you spend the afternoon cradling your new Petland puppy in your arms, or you stop by a Petland location with your kids so the family can visit with one of the many puppies available from the chain in anticipation of buying your first. Afterwards, you don't wash your hands thoroughly enough or you don't wash them at all. Later on, your hand ends up in your mouth or touching food or a utensil that does and — boom — you may have just eaten puppy poop. If your new furry friend was infected with Campylobacter, you're now likely to be, too.

Of the 55 people who've come down with the infection, 14 are Petland employees, according to the CDC. The bulk of them, 35, had "recently purchased a puppy at Petland, visited a Petland, or visited or live in a home with a puppy sold through Petland before illness began." And then there were the miscellaneous cases: Four people had been exposed to puppies "from various sources" while another, mysteriously, had "unknown puppy exposure." A lone person had sexual contact with a person who got sick from visiting a Petland and ended up sick themselves. Thirteen of these people, who ranged in age from 1 to 86 years old, had to be hospitalized, but no deaths have been reported.

For its part, Petland said in a statement that it is working with the CDC and has "re-doubled its efforts in educating staff and customers about proper hand sanitization" since the issue first came up, according to a press release on its website. It also pointed out that cases of the infection have cropped up in Utah, Wyoming, New Hampshire, and Maryland, states where the Ohio-based chain doesn't have locations. Other cases have been identified in Florida, Kansas, Missouri, New York, Ohio, Pennsylvania, Tennessee, and Wisconsin.

Campylobacter infections often cause sometimes-bloody diarrhea, abdominal cramping and pain, nausea, vomiting, and fever, all of which shows up within about two to 10 days after a person comes into contact with the puppy poop, according to Forbes. Healthy people are likely to recover on their own without needing to take an antibiotic, although pregnant women, infants, and young children, as well as the elderly and those with weakened immune systems, could be more susceptible to rare complications such as arthritis and the paralysis-causing condition Guillain Barre Syndrome.

So, yes, puppies are almost always the culprits here. The only ways to pick up the illness through person-to-person contact, Cleveland.com reported, is by having sexual contact with an infected person or changing the diaper of someone with the infection.

For all you puppy-lovers out there, the news is not great. I suspect that this revelation is going to stop you from lovin' on puppies, though.