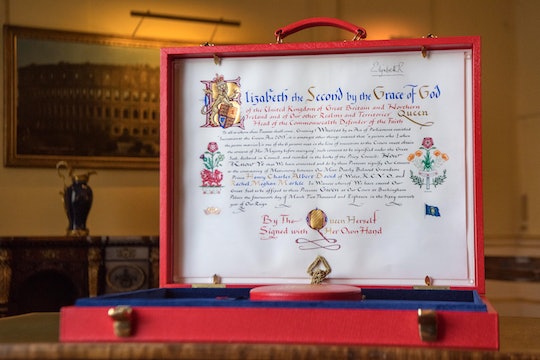 Guys, there's only one week left until the most-anticipated nuptials of the year: The royal wedding of Prince Harry and Meghan Markle! That's right. On Saturday, May 19, the world will look on as an American "commoner" marries into the British royal family. Ahead of the grand affair, the reigning ruler of the United Kingdom has prepared the ultimate stamp of approval for her grandson. That's because Queen Elizabeth has given official consent for Prince Harry and Meghan Markle's wedding. And it's truly a work of art.

On Saturday, Buckingham Palace released the first photos of a handwritten document recording the queen's official consent; it's called the Instrument of Consent, People reported. Queen Elizabeth II had already formally presented a similar document o Prince Harry and Meghan Markle on March 14, at the meeting of the Privy Council, Town & Country magazine reported. But the difference this time around is in the details. See, today's handwritten Instrument of Consent will be gifted to the newlyweds following their nuptials. And the March document was merely typed. I know, I know. You're probably thinking, "Okay, so this isn't even really news because the queen already gave consent." Well, yes technically. But it's still super cool to examine the royal traditions, and to get a peek at this super-cool momento.

So let's compare them, shall we? Here's the March consent from the queen:

And here is an image of the Instrument of Consent released by Buckingham Palace on Saturday.

As E! Online reported, the "Instrument of Consent is drafted by the Crown Office and is, in the case of Prince Harry's marriage, hand-written and illuminated on vellum by one of a panel of scrivener artists retained by the Crown Office," according to Buckingham Palace. Unsurprisingly, every single design and symbol has a specific meaning. The Royal Communications Office explained that "the design to the left of the text incorporates a red dragon, the heraldic symbol of Wales, together with the UK's floral emblems—the rose, thistle and shamrock."

Furthermore, the design to the right of the text includes a rose (the U.S. national flower,) as well as two golden poppies (California's state flower, where Markle was born) — as a nod to the bride-to-be, E! Online reported. In another nod to Markle, olive branches (also featured in the Great Seal of the United States) appear under these symbolic flowers. Also on the document is a Welsh leek with Prince Harry's Label, and a coronet for Prince Harry. And of course, the document includes Queen Elizabeth's signature at the top, right corner.

If you're having a difficult time making out the message, the document itself reads:

NOW KNOW YE that We have consented and do by these Presents signify Our Consent to the contracting of Matrimony between Our Most Dearly Beloved Grandson Prince Henry Charles Albert David of Wales, K.C.V.O., and Rachel Meghan Markle.

Since Prince Harry is sixth in line to the throne, it was a requirement that he obtained formal permission from the queen before marry — thanks to the Royal Marriages Act 1772, according to The Telegraph. Fun fact: A 2013 change to the rule changed the parameters from every royal family member needing this consent to only the first six in line. (As a refresher the line of success is as follows: Charles, Prince of Wales; William, Duke of Cambridge; Prince George; Princess Charlotte; Prince Louis; and then Prince Harry.) And now you know.

As People reported, the release the Instrument of Consent photos comes on the heels of Kensington Palace announcing U.S. Bishop Michael Bruce Curry will be giving the address at the royal weeding.

Between the Instrument of Consent and the announcement of Bishop Michael Bruce Curry giving the address — both on Saturday — things are getting real for Prince Harry and Meghan Markle's big day. And fast. Let the official countdown the royal wedding begin!