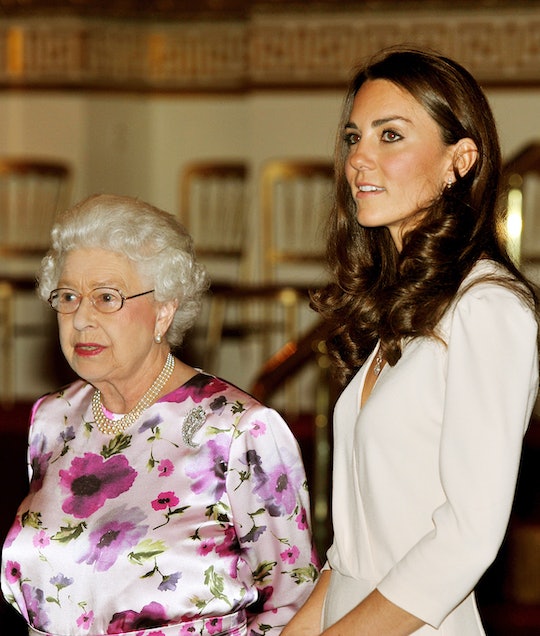 Just weeks out from the royal wedding of Prince Harry and Meghan Markle, the Duke and Duchess of Cambridge have welcomed their third child, who is fifth in line to the throne — a baby boy. Commoners and press have been camped outside the Lindo Wing of St. Mary's Hospital in Paddington, London, but the world remained on edge for Queen Elizabeth II's response to Kate Middleton giving birth.

Breaking with custom from years past, when the only official "reaction" to a royal birth was a retro letter board placed outside Windsor Palace, the Queen relayed her thoughts from the Kensington Royal Twitter account, which announced: "The Queen, The Duke of Edinburgh, The Prince of Wales, The Duchess of Cornwall, Prince Harry and members of both families have been informed and are delighted with the news."

Interestingly, her most recent public address answered obliquely to the abdication fever that has quietly hit Britain, fueled in part by adoration for the royal babies. Many Brits hope that Prince Charles may abdicate the throne, paving the way for Prince William to be the next king. Just days ahead of the latest birth, Queen Elizabeth II confirmed the Prince of Wales' future appointment to head of the Commonwealth, announcing: "It is my sincere wish that the Commonwealth shall continue to offer stability and continuity for future generations and will decide that one day the Prince of Wales will carry on the important work started by my father in 1949."

The warm response to the birth of the new prince is not surprising. The Queen has been described as a "doting granny" by her granddaughter-in-law, the Duchess of Cambridge, per the Chicago Tribune. It was revealed in a documentary aired on Britain's ITV channel that Prince George calls his great-grandmother "Gan-Gan." Pause for applause.

Though the monarch has close ties to all the children in her vast matrilineage, she should have a special spot in her heart for the fifth in line to the throne, the newest HRH Prince of Cambridge, who was born just days after the Queen's 92nd birthday. That marks the Queen and her great-grandson as born under Taurus — and if the reliability, practicality, and ambition that define Taurus don't sum up the Queen, I don't know what does.

A concession to tweet her reactions to the births and engagements of family members should not be understated, given the lack of politesse involved in firing out a statement or retweet on the platform that gave us @dril and helped make cat-breading a thing, but the Queen's true feelings about her family have always been on display when family get-togethers are pictured.

Prince William is of course second in line to the throne after his father, and has undergone much training one-on-one with his grandmother to prepare for his eventual reign, along with his wife, Kate Middleton. But before you get too excited about the Queen's eventual handing off of the royal mace (I'm not actually sure if she has a mace) to her great-grandson, may I direct your attention to the Royal Family Twitter account, site of all breaking reactions to royal births, where I note that the pinned tweet remains a "happy birthday" tweet to the Queen herself.

Maybe the latest news will prove with pinning.