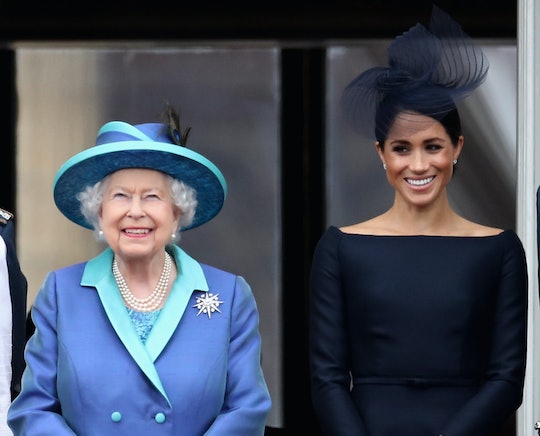 As one might expect, the royals are pretty particular with their likes and dislikes. The Queen of England is no exception to this phenomenon, especially where it concerns pregnancy. Case in point: Queen Elizabeth won't call Meghan Markle "pregnant" because she finds the term to be a bit inappropriate.

When the Duke and Duchess of Sussex announced their pregnancy in October, the Queen expressed her "delight" about the news, according to Town & Country magazine.

“The Queen, Duke of Edinburgh, Prince of Wales, Duchess of Cornwall and the Duke Duke and Duchess of Cambridge are delighted for the couple and were able to congratulate them on Friday at the wedding in person," an official statement read, according to the Daily Express.

Despite the Queen's happiness about her grandchild-to-be, she isn't exactly psyched to call Markle pregnant. Why, you ask? Apparently, the Queen thinks the word is "vulgar," according to a recently resurfaced Us Weekly article.

Instead of using the term pregnant, the Queen reportedly will tell people Markle is "in the family way," according to The Sun. Huh?

The Queen's pet peeve is a bit odd considering there's nothing vulgar about a pregnant person, or the word itself. To be fair to the Queen, however, things were probably different when she gave birth to Prince Charles in 1948. To each their own, right?

The Queen's interesting take on "pregnant" aside, there's a good chance she'll be an awesome great-grandma to the Duke and Duchess of Sussex's baby-to-be.

"Behind closed doors, she's our grandmother, it's as simple as that," Prince Harry said about his close bond with the Queen despite her royal status, according to the Daily Mail.

As for Markle? She has a deep respect for the Queen.

"To be able to meet her through his lens, not just with his honor and respect for her as the monarch, but the love that he has for her as his grandmother, all of those layers have been so important for me so that when I met her I had such a deep understanding and of course incredible respect for being able to have that time with her," the Duchess of Sussex said in an post-engagement interview, according to Now To Love. "She's an incredible woman."

The Queen has a close relationship with her grandkids too. In a 2016 documentary about the Queen's life, Kate Middleton revealed that Prince George calls his great-grandma "Gan-Gan."

"George is only two-and-a-half and he calls her Gan-Gan," the Duchess of Cambridge shared, according to Elle. "She always leaves a little gift or something in their room when we go and stay and that just shows her love for the family."

Given the Queen's sweet and supportive nature with her grandkids and great-grandkids, I bet Markle doesn't mind her annoyance with the word pregnancy. Although the pet peeve is a bit dated and confusing, at the end of the day, it's a small quirk.