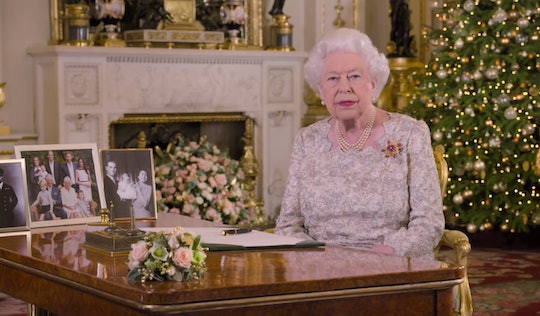 Queen Elizabeth Was A Proud Grandma In Her Christmas Address

Happy holidays! Those across the pond in the UK likely celebrated Christmas in many of the same ways U.S. residents did on Tuesday: With gifts, friends and family, good food, and for many, religious services. However, one tradition the Brits have that we Americans don't is watching the annual Christmas broadcast from the Queen of England — during which the ruling monarch reflects on the past year and brings his/her people together with the holiday spirit. And this year, Queen Elizabeth's Christmas broadcast made mention of the new royal baby.

According to The Washington Post, the royal tradition began back in 1932 when the broadcast was delivered by the queen's grandfather, King George V. (Except, you know, the monarch didn't appear on TV or on YouTube.) Fun fact: A radio studio was created for King George at Buckingham Palace for him to transmit his live speech. Pretty cool, huh? Since then, King George VI and Queen Elizabeth II have carried on the tradition. So it's probably safe to say the royal family is stuck with the annual Christmas broadcast for all of eternity at this point. Which is perfectly fine, considering how regally heartwarming this year's broadcast was.

As People reported, Queen Elizabeth spoke of her eventful year during Tuesday's address. “It’s been a busy year for my family, with two weddings and two babies — and another child expected soon," she said. "It helps to keep a grandmother well occupied ... We have had other celebrations too, including the 70th birthday of the Prince of Wales." Of course the two weddings to which the Queen was referring were the nuptials between her grandson Prince Harry and Meghan Markle, and the wedding between her granddaughter Princess Eugenie and Jack Brooksbank. The two new babies included Prince William and Kate Middleton's third child, Prince Louis, as well as Zara and Mike Tindall's second child, Lena.

And — as every already knows — the baby-on-the-way is Prince Harry and Meghan Markle's first child, who will arrive this coming spring.

Aside from these loving nods to her family, the Queen had a few other gems sprinkled in her Dec. 25 message. "Through the many changes I have seen over the years, faith, family and friendship have been not only a constant for me but a source of personal comfort and reassurance," the Queen said, according to Town & Country. (Perhaps this is her secret continuing her duties as Queen at age 92?)

Queen Elizabeth also stressed the importance of kindness in her address. “Even with the most deeply held differences, treating the other person with respect and as a fellow human being is always a good first step towards greater understanding,” she stated. Which, if you ask me, are definitely words of wisdom from which everyone can benefit in this polarized world we live in today.

Although her Christmas broadcast was pre-recorded, according to Express, the Queen did have a full schedule on Tuesday. She started off Tuesday morning by gathering with the royal family for church services. After that, the royals headed off to the Queen’s Sandringham Estate for a lunch, and then gathered to watch the her annual Christmas address to the nation.

Personally, I thought the Queen's message on Tuesday was poignant and inspiring. (And hey, I'd take Queen Elizabeth's Christmas address over President Trump's Christmas rant any day.) I loved hearing the Queen talk about her family like another regular, proud grandmother would. And I'm sure fans of the royal family were delighted over the nod to Prince Harry and Meghan Markle's baby-on-the-way, too.