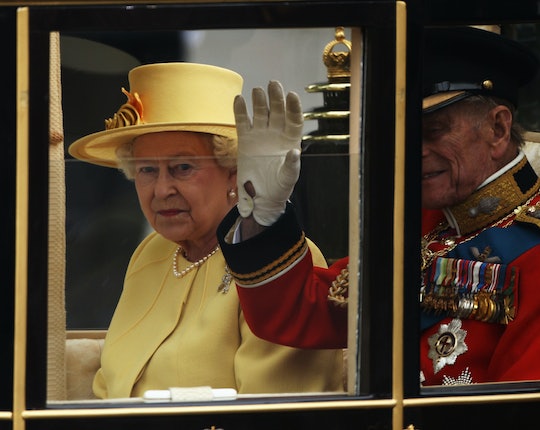 Before Meghan Markle and Prince Harry could walk down the aisle at St. George's Chapel on Saturday, May 19, all that people were talking about were what the new princess would be wearing. However, there was another wedding attendee that everyone was excited to see and that, of course, was Queen Elizabeth. While people had their eyes glued to their screens awaiting a first look at the royal family, viewers couldn't help but notice what the most important guest in attendance was wearing. And let's be real, Queen Elizabeth's outfit at the Royal Wedding exceeded all expectations.

Sure, you could argue that the most important guests in attendance at the royal wedding were Prince Harry and Markle, whose union represented a true fairytale for so many young people watching at home all over the world. But, they wouldn't be there if it wasn't for the Queen, the current reigning monarch in the United Kingdom, and, of course, the head of the royal family.

There were no doubts that the Queen's presence at the royal wedding was a huge deal. So of course, her outfit was, too! The Queen stunned in her matching skirt and jacket ensemble in citine, wearing a gorgeous hat, jacket, and skirt that showed off her royal elegance -- but didn't dare upstage the bride. Pictures from the royal wedding show just how amazing the Queen looked, and we're truly shook over her glam style.

Just like people speculated about Markle's wedding dress months before she walked down the aisle, people also wondered what the Queen might wear to her grandson's wedding. The Queen is known for her monochromatic, matching ensembles, according to Express -- so royal watchers thought long and hard about what color she might end up wearing. Both green and blue were in the lead, according to the Express report, and considering the Queen wore lime green, they were pretty on point. Of course, the Queen had to wear a hat to the wedding because -- according to Insider -- "royal protocol dictates that women must wear hats to all official occasions."

Since the Queen looked so good, people on Twitter had many thoughts, sharing their reactions over the Queen's outfit early in the morning as they watched the ceremony unfold live.

This was a similar look to the ensemble she showed up in when she attended Prince William's wedding to Kate Middleton in 2011. For that wedding, the Queen wore a pale yellow skirt and jacket combination. Even though Prince Harry's wedding to Markle was a bit more low-key than Prince William's, the Queen still made sure to show up in her finest.

While she might not be busting a move to Elton John later in the evening, the Queen's presence during the royal wedding ceremony and reception was definitely appreciated by the viewers at home. There was no denying that she looked absolutely stunning!