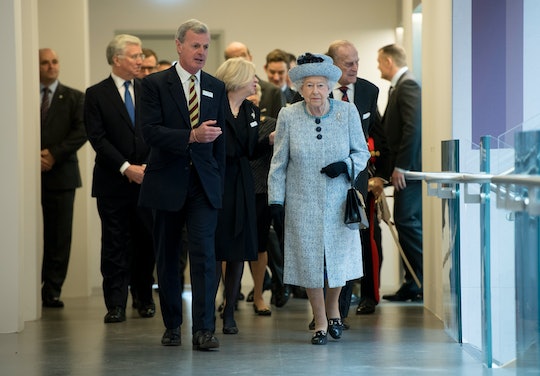 Queen Elizabeth's Response To The UK Parliament Attack Is Important

An apparent terrorist attack occurred at Westminster earlier today. Although details are still scarce, including whether it was a terrorist-related incident, many people in the U.K. and elsewhere are looking for Queen Elizabeth's response to the U.K. Parliament attack. Because when a country is shaken, the citizens look to their leader for reassurance.

Update: According to the Associated Press, British police late Wednesday evening raised the death toll in the Parliament attack to five. At least 40 people were injured. And on Wednesday, March 23, the Queen released the following statement in response to the attack in London at the Houses of Parliament via the Royal U.K. website:

Following the shocking events in Westminster, Prince Philip and I are sorry that we will not be able to open the New Scotland Yard building as planned today, for very understandable reasons. I look forward to visiting at a later date.

My thoughts, prayers, and deepest sympathy are with all those who have been affected by yesterday's awful violence.

I know I speak for everyone in expressing my enduring thanks and admiration for the members of the Metropolitan Police Service and all who work so selflessly to help and protect others.

Although Queen Elizabeth has not yet responded publicly, the early reports from London are startling. According to Reuters, one person was shot and many injured in an incident near Britain's Houses of Parliament. News of the attack's effects on leaders has yet to be revealed. At this time, however, it has been confirmed that Prime Minister Theresa May has been ushered to safety, as explained by BBC News, and Parliament is on lockdown.

Unfortunately, the attack has claimed other victims. As explained by The Sun, a car plowed through a crowd of people on Westminster Bridge, leading to the death of one woman and causing severe injuries in many others. After crashing the car into railings, the attacker ran through the Palace of Westminster's gates and stabbed a police officer with a knife, according to reports from The Telegraph. According to eyewitnesses, the attacker was then shot by police, as explained by The Guardian. At this time, any potential motivations for the attack are speculation.

As the facts continue to unfold, many people have taken to social media to share their responses to the incident. People near the scene reported firsthand accounts of gunfire, as well as the appearance of the knife-wielding attacker. Given the location of the attack, in the busy heart of London, there was apparently no shortage of witnesses and bystanders. Persons working in and around the Parliament also took to Twitter to report their safety.

To no one's surprise, an outpouring of support for those in London has taken over social media. In particular, many are praising the efforts of London's emergency services workers. By all accounts, they have responded promptly and professionally to the incident.

However, the prevalence of onlookers with smartphone cameras and other recording devices has been a major cause of concern for some people. It's entirely possible for anyone to film and upload footage with no restraints. Because of this, maintaining the dignity of the victims is a priority.

And, as to be expected, persons who violate these rules of decorum and respect have faced some serious backlash. Those spotted recording the victims have been called out publicly. In particular, this image of one man photographing the attack with a selfie stick has garnered serious criticism.

For what it's worth, this attack in a prominent area of one of the world's most surveilled cities has allowed people the world over to watch the events unfold in real time. There is no shortage of camera footage of this attack, so hopefully the story behind this incident will be found out soon. As people in the U.K. and the rest of the world wait for official statements from London's leaders, news outlets and social media platforms help provide immediate news from the location of the attack.