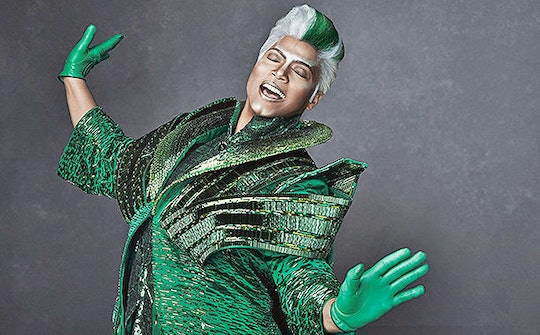 Queen Latifah Mastered The Role Of The Wiz in 'The Wiz Live!' And It Changed Everything About The Story

If you were watching the NBC live broadcast of The Wiz Live! on Thursday night, you may not have noticed that you were actually caught something pretty historic happen on screen. In a role normally reserved for male actors, Queen Latifah mastered the role of The Wiz in the live television broadcast of The Wiz Live! that aired on NBC Thursday night. Before Latifah took up the role of The Wiz, the role was played by Richard Pryor in the 1978 film version. Andre DeShields originated the role on Broadway in 1975. And Latifah’s performance brought all of the strength, humor, and excitement that the role is known for. (And, still, she was called "Sir" by the other characters.)

As Dorothy put it when she finally made it behind The Wiz's mask and heard her friends express surprise that the great and powerful was a woman, "Ain't nothing wrong with being a woman." Preach.

With a cast that included David Alan Grier, Ne-Yo, Common, Uzo Aduba, and Mary J Blige, the performance promised to be a hugely popular television event. After being performed by casts on Broadway and Hollywood since 1975, any new version of The Wiz would be seen as an event to unite generations.

And Thursday’s one-night performance didn’t disappoint, but Queen Latifah’s appearance was actually a nod to the deeper, modernized character backstories developed by Harvey Fierstein, who penned the NBC version. In the new story, The Wiz comes to Oz having left a difficult relationship with his husband. The storyline is one of many ways that Fierstein looked to empower the female characters for a new generation.

Speaking to The Hollywood Reporter, Fierstein explained a bit more: