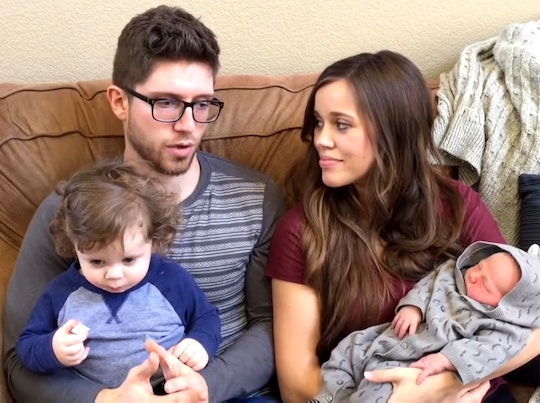 Anyone who's familiar with the last name Duggar could probably guess that the theme of Christianity comes up in quotes from Jessa Duggar Seewald's blog pretty often. But read through a few posts and it becomes clear that Seewald's faith isn't just important to her — it's everything to her. The Seewald Family blog is written by both Jessa and her husband, Ben, and no matter what subject they write or vlog about, it always comes back to God.

The format of the blog is a mixed bag. Some of the posts are typed-out musings, there's a monthly photo dump starring their 1-year-old son, Spurgeon, some video interviews of prominent evangelicals here and there, and the couple regularly gets together to make videos wishing family members a happy birthday, or congratulating them on marriages, pregnancies, or births. As one would imagine, that takes up about half of the blog. Imagine what their calendar looks like! In a way, the written posts are typical of a family blog. They detail both the milestones and the mundane, but the striking difference is that every post is heavily filtered through a Christian lens. You know when you get a new car, and then you start seeing the same model everywhere you go? It's like that, only instead of seeing Honda Odysseys everywhere, they see Jesus.

Sometimes it's more organic, like when they wished their fans a Merry Christmas (it's also a certain someone's birthday, after all) or when they used Martin Luther King Jr. Day as an opportunity to remind readers that "Racism is an attitude that is diametrically opposed to Christianity." Other times, less so. Like when Jessa posted an open letter to her mother on her birthday that began by praising Michelle Duggar, but quickly shifted gears to praising the Lord: "Jesus shines through you, and that is what is most attractive." However, it's a fitting tribute to the woman who taught her to think that way.

But at times, this tone can make the posts inaccessible for all but the most fervent believers. In October 2016, Ben posted a review of the 2011 Marvel movie Thor, in which he negatively compared the superhero to Jesus. Thor, a "supposed god" (who was actually a pretty important actual god to much of Europe before Christianity took over), doesn't impress Ben much, it seems. His bravery in saving Natalie Portman and Kat Dennings "pales in comparison to the true story of Jesus and what He did to rescue man from destruction," Ben wrote, and Jesus is superior because he's "coming back one day to defeat His enemies." Presumably, he hasn't seen The Avengers, Thor: The Dark World, or Avengers: Age of Ultron yet.

Other times, their fervor can be downright alienating, like in a recent uncredited post in which one of the Seewalds railed against the news media, referring to it as "idolatry" because anchors don't actively affirm that "human sinfulness" is "the ultimate problem," and Jesus is "the ultimate solution." It's a little much, some might say, to demand that CNN reporters proselytize during every news segment, and Marvel only make movies about Jesus. But it works for them! Whatever your religion, or lack thereof, the Seewalds' blog offers a fascinating glimpse into their lives.