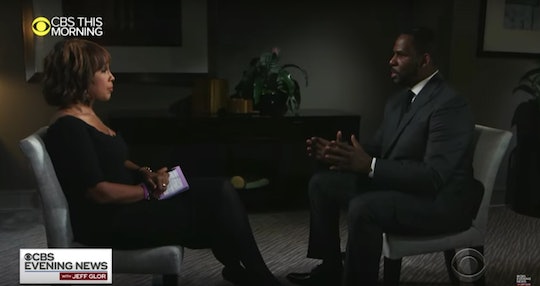 Chances are, at some point over the last few decades or so, you've heard something about allegations against rapper R. Kelly. However, you may not have heard all that much about them until more recently. After Lifetime aired a documentary series called Surviving R. Kelly, it seemed those allegations against him were more widely known than ever before. In fact, as The New York Times reported, shortly thereafter, charges were filed against the rapper in Cook County, Illinois and he was arrested. He has since pleaded not guilty and R. Kelly denied the allegations against him yet again in an emotional new interview with Gayle King — his first sit-down on TV since he was charged with 10 counts of sexual abuse.

R. Kelly's rep have not responded to Romper’s request for comment.

As Chicago's CBS News affiliate reported, the rapper spent three days in jail before posting the $100,000 necessary for him to be released and he's been prohibited from having any contact with his accusers or any children under the age of 18, as well as any witnesses.

The rapper, whose real name is Robert Kelly, according to The New York Times, sat down with CBS This Morning anchor Gayle King to speak about the allegations in a quite emotional interview. Though two short clips were released on Tuesday evening, the full interview ran on Wednesday morning, according to Vulture.

In the interview, after King asks him several questions regarding the allegations, Kelly cries and raises his voice. At one point he yells, "Stop it. You don't quit playing. Quit playing. I didn't do this stuff! This is not me! I'm fighting for my f***ing life!"

When King asked him if he had ever "been with underage girls," Kelly responded, "People are going back to my past ... and they're trying to add all of this stuff now to that to make all of the stuff that's going on now feels real to people."

Three of the four alleged victims related to Kelly's current charges were reportedly underage at the time that they allegedly interacted, according to Deadline.

King also asks Kelly about the allegations he held alleged victims "against their will." According to The Telegraph, Kelly has been accused of keeping a woman "in sexual slavery."

"Correct me if I'm wrong that you've never held anybody against their will?," King asked.

King also addressed Kelly's 10-year-old case in which he was acquitted of child pornography charges, according to The New York Times. "Old rumors, new rumors, future rumors. Not true!" he said in the interview.

Kelly's interview with King quickly gained attention on social media, with many on Twitter noting King's demeanor when the rapper got out of his chair and raised his voice, as BuzzFeed News reported. Reporter For example, Yamiche Alcindor tweeted on Wednesday, "This is wild. @GayleKing is again teaching a master’s class in interviewing. She remains so calm and focused while @rkelly loses it."

King's interview with Kelly was, indeed, "explosive" as CBS News described it to be. It's not clear if Kelly will speak on the allegations and charges made against him again, but viewers are applauding King for asking the tough questions many have wanted answers to.

More Like This
'Clueless' Is, Like, Totally Still A Good Teen Movie In 2022
The Summer I Turned Pretty Is Officially Returning For Season 2
Catherine Reitman Calls It Like She Sees It: “Being A Working Mother Is Impossible”
10 Ways Prince George & Prince Louis Are So Different From Each Other