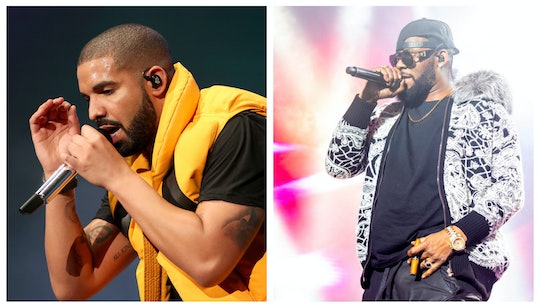 Why Is It So Hard To Hate The Men We Like?

I was too young to understand what was going on when I first started hearing jokes about R. Kelly — when he was indicted on child pornography charges in 2002, I was only 10 years old. And even though my classmates made jokes and references to the event as we aged, I don't think they understood what had really happened either.

While I say we didn't understand what "happened," I believe we still knew what went down. The jokes made clear reference to him supposedly urinating on a young girl. But at that age, I didn't understand power dynamics or the pervasiveness of sexism. Heck, at that stage I hadn't even realized that we live in an anti-black society.

The jokes were never funny to me; they were always too crass for my humor. But the references to R. Kelly were made all over TV — including that infamous clip from Chappelle's Show.

This is all to say that when I watched Surviving R. Kelly, the docuseries exploring allegations of sexual assault against the rapper, it was not the first time I'd heard his actions referenced in pop culture. But it was the first time I was aware of the horrific range of actions he allegedly committed. (Kelly's lawyer has denied all claims within the docuseries, per TMZ, and did not immediately respond to Romper's request for comment.)

Black women in particular are taught to accept abuse.

As a survivor of sexual abuse, there were many aspects of the docuseries that made me uncomfortable. But there were two parts that stood out most of all, the first being the lack of action taken despite the fact that seemingly everyone knew what he did. And the second being the wide range of those abusive behaviors that I had experienced in my own lifetime.

I finished the documentary feeling like from a young age, women in general, and black women in particular, are taught to accept abuse. But those are things I already knew from my own life.

I was angry at the individuals who posted arguments Kelly shouldn't be held accountable for his offenses on social media. His music, I felt, needed to be boycotted.

Truthfully, I knew the lyrics to a few R. Kelly songs, but he was mostly a singer of yesteryear. I didn't have much of an attachment to his music and it didn't impact me if he was locked up for his alleged crimes.

I looked down from my high horse at those who didn't get it and told my friends how ridiculous they sounded. To me, canceling R. Kelly was easy. It didn't make sense to me that people could place a musician they’d never even met on such a pedestal that they felt obliged to make excuses for them in the face of serious accusations.

That is, until it was an artist that I knew and loved.

When I started seeing headlines alleging Drake had inappropriately groped a 17-year-old at a 2010 concert in Denver, Colorado (Drake did not immediately respond to Romper's request for comment on the video concerned), suddenly I was the hypocrite.

I couldn't believe an artist who sound had carried me from high school to college and even into motherhood could do something like that.

Suddenly, it was me who needed all the facts. Hearing that she was an underage girl wasn't enough for me. I needed to know her exact age and what role she had played in interacting with him. I couldn't believe an artist who sound had carried me from high school to college and even into motherhood could do something like that.

I’d become one of those people that I had been calling out days before. And then it all made sense to me.

The emotional connection that fans feel with an artist is based on the experiences they can tie their music to; on projecting their own lives onto that music. It is hard, then, to accept that someone we feel close to has done something bad. But the real reason we have such trouble denouncing those who have sexual interactions with underage individuals is because our culture encourages us to blame women and girls for the abuse they suffer.

It's quite possible the young girl at the Drake concert does not see herself as a victim. But that does not change the problematic nature of a then-24-year-old groping a teenager.

My experience making excuses for Drake's actions taught me that we all have a lot of growing to do relating to sexual abuse. Even abuse survivors, like myself, a mother with a baby girl, have the potential to further deny others' experiences and to internalize rape culture and misogyny.

The love I have for Drake's music should not mean more to me then the safety of girls and women. Individuals who make excuses for R. Kelly need to come to the same realization.

It's easy to stand with survivors when it doesn't impact your daily routine. But how many of us are willing to take the stance when it inconveniences us and takes away something we enjoy?

As a black woman, I am at an increased risk for all types of societal abuse. Many times, that abuse goes unacknowledged by the society at large as well as individuals in my own community. Although I am often on the receiving end of those abuses, it is important that I hold myself accountable and take that same stand that I am asking of others.

If that means canceling some of my favorite musicians, then that's what it's got to be. Because the safety of women and girls is worth more than a song.

This article was originally published on Jan. 9, 2019