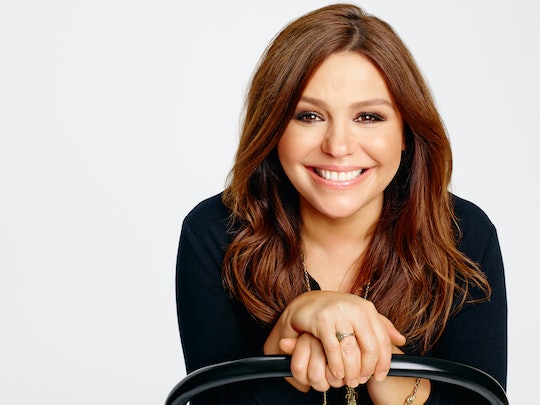 This goes out to all the cooking show fans out there, and for anyone who appreciates a good deal. Last month, Rachael Ray sold her clothes and accessories for charity by teaming up with Poshmark, a social fashion marketplace, for "Posh Closets for Charity," a virtual shopping event. Ray put 70 of her most covetable clothing and jewelry items on sale and they sold out in less than 48 hours. Now Ray's second and final "closet drop" is about to go down, and foodie fans and fashion lovers alike are salivating. Today, June 14, starting at 12 P.M. Eastern Time, 70 more items from Ray's closet will be available for purchase, with all proceeds going to Yum-o!, the food charity she founded in 2006.

Rachael Ray's shoppable pop-up closet will feature designer clothes, jewelry and accessories from Christian Louboutin, Missioni, Elizabeth and James, and more. Some of the items were worn on the Rachael Ray Show, including two velvet, jewel-toned Anthropologie blazers that are divine — or should I say, delish! Other items were worn by Ray as she brushed shoulders with some pretty iconic people. You can scoop up the Raquel Allegra cashmere sweater Ray wore to the White House Easter Egg Roll with Michelle Obama and the Rickie Freeman for Teri Jon gown that she wore to the White House State Dinner in 2016. To quote Ray's cooking catchphrase, "How good is that?"

During the pop-up closet charity sale, can also get your hands on the colorful Isabel Marant Étoile skirt that accompanied Ray to the puppy party launch of her Nutrish DISH pet food line, or the ethereal white Robert Rodriguez dress that she rocked in Melanie Dunea's book My Last Supper, the Next Course. As you can tell, these are some premium clothes, not ones that were buried away in the back of her closet collecting dust.

"I’m so excited to partner with Poshmark to launch my Posh Closet for Charity for the benefit of our Yum-o! organization,” Ray said. “These are some of my favorite items!”

If you're thinking most of these designer duds will be out of your price range, think again! I was very pleasantly surprised to see that many of the items from Ray's first closet drop sold for less than $100, with some of the jewelry items even priced below $30. The most expensive item from the last drop, a Marc Bouwer black sequin sheer dress, went for $375. Not bad considering they were worn by one of today's biggest television personalities. Plus, if you snap up a jacket or dress worn by Ray, you will have a great outfit to wear, and story to tell, for your next dinner party.

Perhaps best of all is that the proceeds from Rachael Ray's Poshmark sale go to a very worthy cause. Yum-O!, the non-profit organization the cooking show host founded to help families form healthy relationships with food, also works to feed hungry kids and fund cooking education and scholarships for youth looking to get into the food and restaurant business.

"Given Poshmark’s commitment to inspiring success, spreading love and creating opportunities for its community to give back, Posh Closets for Charity has become the leading program for influencers and celebrities to support causes they care about,” said Manish Chandra, founder & CEO of Poshmark. “We’re thrilled to partner with Rachael Ray for our latest Posh Closets for Charity collaboration — her dedication to people and giving back makes her the perfect addition to the Poshmark community.”

I, for one, will have my hand firmly on the mouse tomorrow at 12 PM Eastern, to try to score one of these star-powered items.