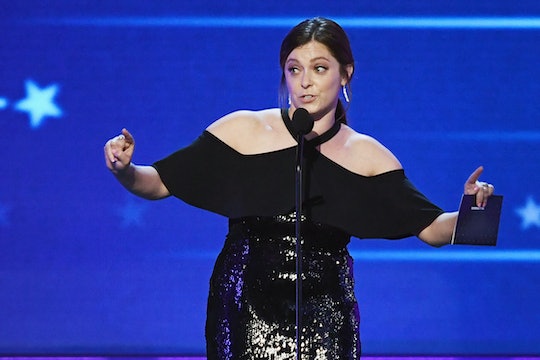 The 2017 Golden Globe recipients haven't been announced yet, but Rachel Bloom has already won the night without even stepping on the red carpet. How you may ask? Well if you take a look on Twitter, you'll see that Rachel Bloom's nails at the Golden Globes are better than any basic mani you'll see tonight.

The Crazy Ex-Girlfriend star took to twitter before the big night to share her meaningful manicure. Atop each of her perfectly polished nails were a painted portrait of her co-stars. Bloom captioned the photo by writing, "Since I'm being honored at the #GoldenGlobes for my acting, it's only fair that I bring the cast of #CrazyExGirlfriend with me." (Bloom also posted the photo on Instagram with a slightly different caption that read, "A leading lady is nothing without her fellow actors, so I found a way to bring the entire cast with me to the Golden Globes tonight. #crazyexgirlfriend#goldenglobes.)

Her manicure holds even more significance, as Crazy Ex-Girlfriend was renewed for Season 3 earlier in the day, according to Playbill. So she's kind of having an awesome day.

Crazy Ex-Girlfriend stars Bloom as Rebecca Bunch, a one prestigious New York-based lawyer who, after a chance encounter with an ex, moves across the country to find love. A unique roll that requires some serious singing and dancing skills, it has lead to many accolades for the actress, including the 2016 Golden Globe for Best Actress in a Musical or Comedy TV Series, according to Rolling Stone. Bloom, who is also the creator and writer of Crazy Ex-Girlfriend, was up against industry vets Julia Louis-Dreyfus, Lily Tomlin, and Jamie Lee Curtis, as well as relative newbie Gina Rodriguez. In her acceptance speech, Bloom said of the show:

We got six rejections in one day, and we felt like crap. Mark Pedowitz from the CW picked it out, and he's the one who saved us. He's the reason there's a musical comedy on network television right now, and I can't believe I'm saying that right now

This year, Bloom is up against Louis-Dreyfus and Rodriguez again, as well as Sarah Jessica Parker, Issa Rae, and Tracy Ellis Ross — fairly fierce competition. And even if Bloom does take home another win, her nails were still the highlight of the evening.