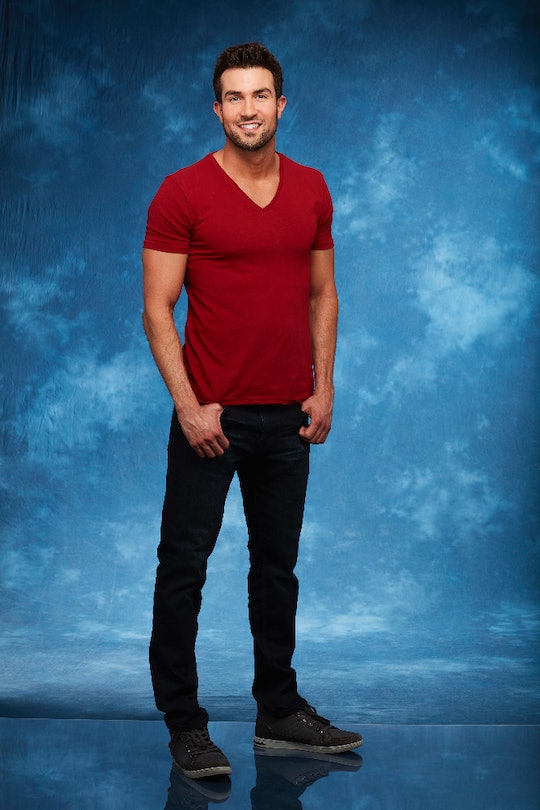 Bryan May Be A Frontrunner On 'The Bachelorette'

In Bachelor Nation, the rules of dating are a little off, which makes sense because it's always 30-plus people fighting over one person. This is why a contestant kissing the Bachelor/Bachelorette on the first night is explosive and may cause dramatic music and chaos in the mansion to occur. Such was the case when Corinne kissed Nick Viall the first night of The Bachelor last season. Now it's Rachel's turn on The Bachelorette, and Bryan managed to steal a kiss — and the first impression rose to boot. Rachel and Bryan kissed on the Season 13 premiere of The Bachelorette, and the other men should be nervous of their competition.

Bryan impressed Rachel right when he stepped out of the limo. He spoke to her in Spanish and said that she was in for some "trouble." He later "stole her for a second" (classic move) at the cocktail party and told her more about himself. He's 37 years old, which is older than the typical Bachelorette contestant — and a chiropractor. Rachel said that she "loved" how old Bryan was because he's looking for something serious. She may be thinking they could be a good match, because at 31 she's older than the usual Bachelorette (JoJo Fletcher from last season, for example, was 25 years old during filming).

Rachel confessed in a confessional that she was smitten with Bryan from the start, and he may have taken that hint: during the cocktail party, he kissed her — making him the first to do so this season. Rachel also said she was not planning on kissing anyone the first night, but she didn't mind that it happened with Bryan. Rachel ended up giving him the first impression rose as well, and said the kiss earlier "sealed" it for her. They then kissed again; it's pretty clear that Bryan is a frontrunner just from the few interactions they had.

Last season, Rachel received the first impression rose from Nick. Not only was it foreshadowing of how far she'd go in the competition (she came in third), but now Rachel knows how valuable that first rose is. Unlike last season where Rachel got the rose but Corinne got the first kiss, Bryan managed to do both. Bachelor Nation has only seen one episode, but this may be a sign of how long Bryan will last this season. Given how much Rachel likes him already, viewers can fairly assume they'll be seeing him for awhile.

More Like This
14 More Amazing Shows Like Workin' Moms To Watch That Also Get Real About Motherhood
Yellowstone Season 5 Will Have More Episodes Than You Were Expecting
A Breakdown Of Who’s Who From The Dutton Family On 'Yellowstone'
Our Fav Funny Couple Melissa McCarthy & Ben Falcone Created A Weird, New Comedy Series