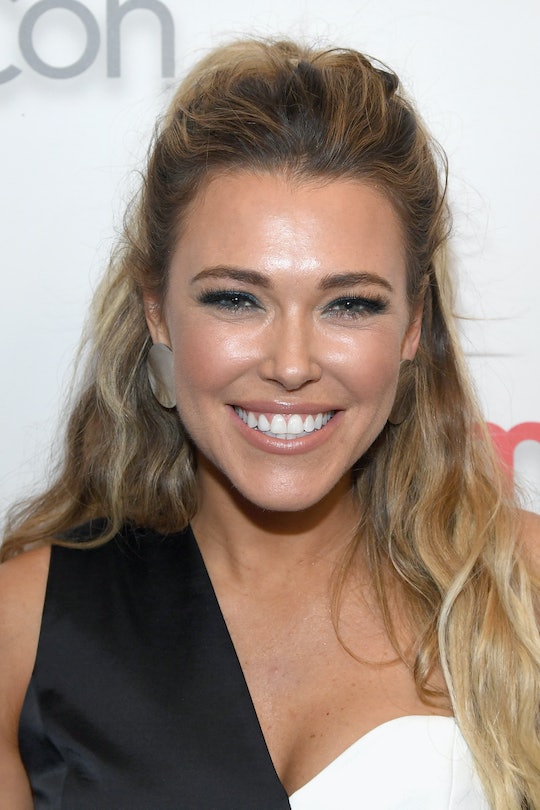 'Tis the season for celebrity babies! But seriously, though; is it just me, or does it seem like every time I turn around, there's yet another adorable celeb birth announcement staring me in the face? Because it looks like congratulations are in order for one well-known singer. On Wednesday, Jan. 30, the artist behind the massive hit, "Fight Song" took to Instagram to announce the arrival of her first child, People reported. As it turns out, Rachel Platten gave birth to a baby girl — and her first photo will melt your heart.

According to the publication, the first-time mom revealed that she had given birth this past weekend. "Introducing Violet Skye Lazan. Born delicious & cuddly on 1.26, early in the am," Platten wrote, alongside a photo of herself snuggling her newborn on her chest. "There is so much about this massive love that I want to share but don’t yet know how to. I am sure the words will come soon. For now we are busy falling deeeeply in love (and keeping our heads above water)." The new mama went on to thank her followers for their support as she navigated through "this crazy brutal amazing journey to get here to motherhood," concluding, "Wow. I'm a mom."

Platten's Instagram followers promptly swooned from the ridiculous levels of cuteness in the star's photo. One fan commented, "OMG! She is BEAUTIFUL! 💕💕💕 Congrats mommy!"

Yet another follower chimed in with, "CONGRATS to you and Kev! You're gonna be an amazing Momma 😘😘."

Another Instagram user left what I would consider the perfect message to a first-time mom, writing, "She looks so absolutely beautiful and you both look so content. Enjoy this special time, it goes so very fast—but also know it is ok to feel overwhelmed and scared and sad too. All the feels for sure." Amen.

Platten is perhaps best known for her 2015 debut single "Fight Song", which became an anthem for people across the world. Using the hashtag #MyFightSong, fans posted photos, videos, and messages about their struggles, as reported by Newsweek.

Since then, fans have been eager to keep up with Platten. In 2010, Platten married Kevin Lazan, as reported by Southern Weddings. As E! Online reported, Platten announced back in July that she and her husband were expecting their first child. "This is one of my most exciting announcements, but also one of my most vulnerable. So here goes…. I am pregnant!!" Platten captioned a photo of herself cradling her bump. "I can’t believe I’m finally typing these words – I have wanted to share this news for months."

As Us Weekly reported, Platten revealed they would be having a baby girl during an appearance on Good Morning America in October. One of the show's producers came on-camera with a pink and a blue baby body suit, and the mom-to-be announced, "I'm having a girl!"

Platten went on to sing a song she wrote for her daughter, called "You Belong."

Clearly, Rachel Platten is over the moon for her baby girl. At the same time, though, she's probably also feeling some level of exhausted and overwhelmed. Because been-there-done-that moms already know, new motherhood can be a rollercoaster ride. I'm so excited for Platten as she begins this new chapter in her life — and I can't wait to follow along as she (hopefully) shares her journey with fans. Congrats, mama!

More Like This
Alec & Hilaria Baldwin Welcome Baby #7, And Revealed Her Cheerful Name
Khloé Kardashian Shares First Look At Her Son & His Birth
Khloé Kardashian Reveals Tristan Thompson Proposed To Her Last Year & Why She Said No
People Are Convinced Kylie Jenner Gave Her Baby Boy A Weather-Themed Name