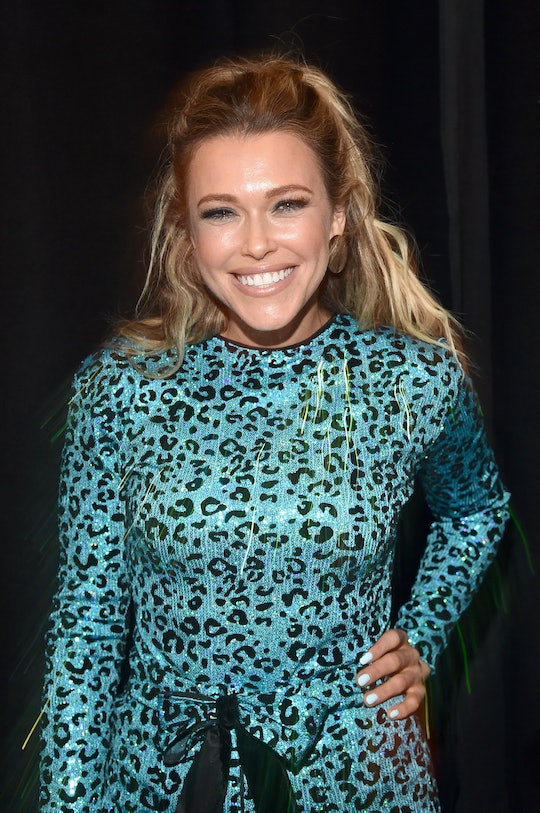 Social media has opened my eyes to the many different activities parents participate in with their children — and many of them start incredibly young. I see photos of toddlers in elaborate dance outfits or gymnastics singlets quite frequently, for example. But one activity in particular can begin even sooner: yoga. I've always wondered what, exactly, a yoga class for someone so young might be like. Well apparently, Rachel Platten took daughter Violet to baby yoga — and the videos are adorable.

In case you missed the big news, the "Fight Song" singer welcomed her first child with her husband Kevin Lazan — a daughter they named Violet — on Jan. 26, People reported. And it looks like Platten didn't waste any time in signing up for what appears to be a "mommy and me" yoga class with her infant daughter. That's because the new mom shared a few video clips on her Instagram Story. "This is so cute," Platten says to the camera in one clip, before briefly panning to her baby girl lying on a yoga mat and then back to herself. "Baby yoga!" she declares.

Another clip again shows Violet during the class, but then pans over to another little one. "Did you find a boyfriend?" Platten asks her daughter in the video, also writing, "A yogi boyfriend!!!!"

A third and final baby yoga clip shows a wide angle of part of the class. Moms have their babies resting on their shins (while holding onto their arms for stability) and are gently extending their legs/taking their infants for a little ride.

I mean, all of this is incredibly cute, no doubt. But aside from the social aspect of it — getting new moms and their babies out of the house and making connections — I always wondered if there are actually any physical benefits to baby yoga?

So, the fact that parents are taking time out of their day to put their baby in different positions, will over time increase strength and development.

It's worth noting that some sources claim baby yoga can help with digestion and sleep. However, it isn't clear how valid these claims are because there's little to no research on the topic of baby yoga, according to Live Science. Furthermore, a review of studies on yoga for children carried out in 2009 showed they "were of low methodological quality," so substantial conclusions couldn't be made. Still, unless parents are reckless about the poses their putting their babies in, make movements too large, or let them go through class with their heads unsupported, it's likely OK to give baby yoga a try.

Personally, I think it's cool that Platten gave her Instagram followers a glimpse into baby Violet's yoga class. I'm still not sure if it's something I would enjoy doing with my own infant daughter. But hey. At least I know what to expect if I ever decide to make that leap: Cuteness overload!