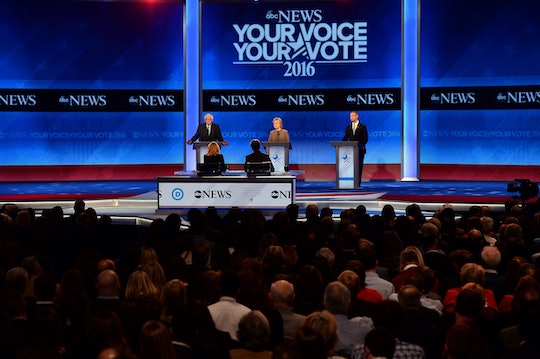 The last Democratic debate before primaries had its finger on the pulse when it came to issues actually affecting the United States. Racism was discussed more than at all of the GOP debates combined, a trend that's already been seen at previous debates. At the NBC debate in Charleston, South Carolina, Lestor Holt and YouTube vlogger Franchesca Ramsey asked the candidates about racism and the criminal justice system, a topic which has reached a fever pitch for the public, but has somehow been excluded from GOP debates. In fact, at Sunday's democratic debate, racism was addressed more than at all the GOP debates combined. Considering that, in 2015, The Washington Post reported that black men were seven times more likely to die by police gunfire than white men, it's about time politicians addressed racism and criminal justice head-on.

By October, a divide had already emerged in Democratic and Republican debate topics. Democratic candidates were mentioning racism in their introductions as they spoke about the issues that matter to them. They brought up issues of income disparity, lack of opportunities, and the fact that nearly half of American prisoners are black.

Democrats also showed their support for the Black Lives Matter movement — while Republicans had yet to even say the word "black" at that point in time. They did, as The Huffington Post pointed out, say "African-American," but it was a word mentioned only once by Senator Rand Paul. Donald Trump, on the other hand, has called the Black Lives Matter group "trouble"; Chris Christie said many of them "advocate for the murder of police officers"; and Ted Cruz said Black Lives Matter was evidence of an anti-police culture that's emerging, according to USA Today. And yet, no GOP debate has actually talked about the systematic racism or underlying issues in the criminal justice system.

At the Democratic debate on Sunday, however, Democrats were given hard questions about systematic racism and criminal justice, and they responded with strong answers. NBC's moderator Lestor Holt asked about Walter Scott's death, Black Lives Matter, and criminal justice reform. He also opened up questions for YouTubers who asked about the dangers of allowing local prosecutors investigate police violence within their own communities. The candidates' answers were well-thought-out and — most importantly — never failed to stand with Black Lives Matter or deny the issues.

"There needs to be a concerted effort to address the systemic racism in our criminal justice system," Clinton replied. "That requires a very clear, agenda for retraining police officers, looking at ways to end racial profiling, finding more ways to really bring the disparities that stalk our country into high relief. ... I want people here to think what we would be doing if it was one out of three white men, and very often, the black men are arrested, convicted, and incarcerated for offenses that do not lead to the same results for white men."

Sanders did not disappoint, either. "Who in America is satisfied that we have more people in jail than any other country on Earth, including China?" he asked. "Who is satisfied that 51% of African American young people are either unemployed, or underemployed? We need to take a very hard look at our criminal justice system, investing in jobs and education, not in jails and incarceration."

Pretending problems don't exist is the wrong way to address them, and the GOP could take a few pointers from tonight's Democratic debate, which addressed racism exactly as it should.