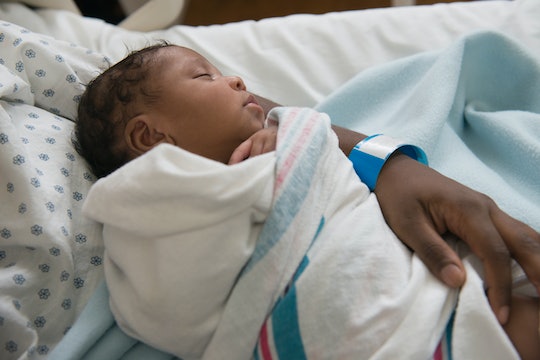 A new national report has shown that racism can harm children's health and development before birth. While the state in which a baby is born can be a defining factor in that child's development and well being, early childhood nonprofit Zero To Three found its second annual State of Babies Yearbook report that Black and Brown babies face major inequities no matter where they're born, including higher rates of infant mortality, preterm birth, and low birthweight.

"Our nation has been complacent for too long and has looked the other way when Black and Brown families have struggled," Zero To Three's chief policy officer Myra Jones-Taylor said in a statement. "But our babies deserve more than what we're giving them — they deserve the same opportunities as any other child."

According to the State of Babies Yearbook: 2020, children of color and children living in poverty face bigger obstacles compared to other children. These obstacles, some of which occur before the child is even born, can have life-altering effects on the child's overall health and development. For example, among the racial and ethnic inequities Zero To Three found were disparities in prenatal care. While just 4.5% of white women in the United States were reported to have received either no prenatal care or late prenatal care, 9.9% of Black women reported receiving late or no prenatal care when pregnant.

The report also found Black mothers had a preterm birth rate 55% higher than the rate for white mothers. A preterm birth occurs before the 37th week of pregnancy. Babies born prematurely can have higher rates of death and disability and may experience feeding difficulties, cerebral palsy, developmental delays, and breathing, hearing, or problems, according to the Centers for Disease Control and Prevention (CDC).

Zero To Three's report also found that Black mothers had a significantly higher risk for low-weight births compared to white mothers. While white women's risk was reported nationally to be 6.9%, Black women's risk was 14.1%. A Low birthweight is anything less than 5 pounds, 8 ounces, according to March of Dimes. While some babies born with a low birthweight grow up to be healthy, others can experience serious health problems such as troubles eating, gaining weight, and warding off infections, as well as respiratory distress syndrome, patent ductus arteriosus, and bleeding in the brain. What's more, March of Dimes notes that a low birthweight can increase a baby's risk of developing certain chronic health conditions later in life, such as diabetes, obesity, heart disease, metabolic syndrome, high blood pressure, and intellectual or developmental disabilities.

Black babies were also found to be more than twice as likely as white babies to die before reaching their first birthday. Data provided in Zero To Three's report showed that 40.8 Black infants died per 100,000 live births compared to 13.2 white babies.

"This is an unmitigated crisis that impacts babies and families in every single state in our country, and it has long-lasting impacts throughout our lives," Jones-Taylor said. "If we want to truly address the issues plaguing Black and Brown communities in the United States, we need to start by identifying disparities, addressing them with specific policies and budgets, and making the potential of every baby a national priority."

While recent protests over the deaths of George Floyd, Ahmaud Arbery, Breonna Taylor, and others have shined a light on racial inequalities and systemic racism, pediatricians have previously declared racism to be "a social determinant of health that has a profound impact on the health status of children." More recently, the American Academy of Pediatrics (AAP) called on pediatricians "dismantle racism at every level" and root out inequities that threaten children's health.

"We must dismantle racism at every level, from individual to institutional to systemic," AAP President Sara "Sally" H. Goza said. "Racism harms children’s health, starting from before they are born. A growing body of research supports this, and we cannot ignore the impact."