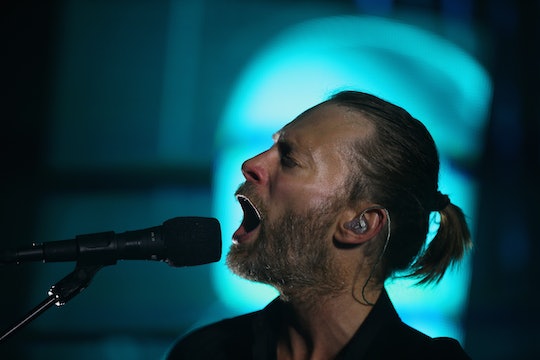 Fans of both James Bond and Radiohead got an unexpected Christmas surprise Friday morning when Thom Yorke released the James Bond Spectre theme that didn't make it into final cut of the blockbuster hit. Yorke dropped the previously unheard tune via Twitter, confirming that the band was at one time involved with the film, saying, "Last year we were asked to write a tune for Bond movie Spectre. Yes we were..." Yorke explained that the arrangement didn't work out between the band and the film, then added: "As the year closes we thought you might like to hear it. Merry Christmas. May the force be with you..." Bonus points for invoking Star Wars in his holiday greeting.

The song — simply titled "Spectre" — is pure Radiohead awesomeness: sweeping symphonic backing with Yorke's echo-y vocals soaring overhead. And it wouldn't be a Radiohead tune if there wasn't a wonky time signature beating steadily at all the beats you don't expect them to. It is a seriously gorgeous, atmopsheric tune that happens blend in just the faintest hint of the James Bond theme we all know so well — but that classic theme isn't terribly recognizable if you weren't already looking for it.

Take a listen and decide for yourself how Bond-worthy their previously unreleased track really is:

With the news that current 007 actor Daniel Craig is done playing the international spy — combined with this unlikely artistic collaboration with Radiohead — it's exciting to think that this 53-year old franchise might be ready to finally shake things up: Maybe the next big Bond announcement will involve British actor Idris Elba? This Bond fan can hope, anyway.

More Like This
What Exactly Are Minions, Anyway ?
Megan Fox Explains Why She Asked Machine Gun Kelly If He Was Breastfed As A Baby
Victoria Beckham Reflects On Being Forced To Weigh Herself On TV After Giving Birth
Camilla Parker-Bowles Asked Kate Middleton To Take Her Birthday Photo For A Magazine Cover