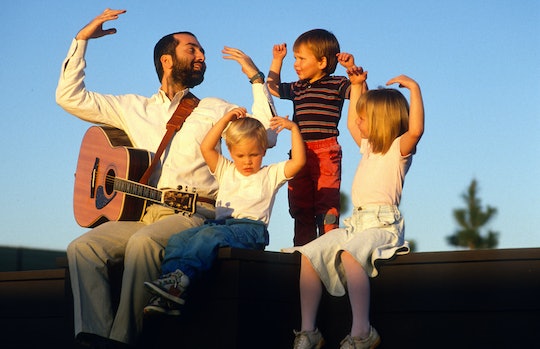 Can Raffi Still Save Us?

While it may seem impossible to fight climate change with a guitar and repertoire of kids songs, those are the tools at the disposal of beloved children’s entertainer Raffi. Having touched on all sorts of environmental topics from the '70s classic “Baby Beluga,” about a whale, all the way to 2007’s more explicit “Cool It,” made with scientist David Suzuki (“Cool it, cool it, cool this planet down”), Raffi Cavoukian, now 71, is still writing for children, but also for their parents; those who grew up with his music, and whom he calls “Beluga grads.” The question is, are today’s parents hopeful enough for their children’s futures? And have we let Raffi down?

The Canada-based singer, who is of Armenian descent, was born in Egypt and rocketed to fame with “Songs for the Very Young,” covers of folk songs and original creations that have the plaintive sound of Cat Stevens for the elementary school-set. While his early songs and the ones most familiar to current parents may seem lighthearted (“Bananaphone”), Raffi is quick to point out that he has always promoted deeper meaning in his lyrics: “What was ‘Baby Beluga’ if not an introduction to all this, you know?” he asks Romper, referring to his climate-change agenda. “The side of me that has been an ecology buff and a guy who respects this amazing planet we call Earth — my goodness, that's been there all along.”

In other words, on stage, with his guitar and microphone, he still has hope. “All I really need,” Raffi reminds me, quoting the song of the same name, “is a song in my heart, food in my belly and love in my family.” The song came out in 1979, but the fundamentals haven’t changed. “The basics of life don't change for us humans,” says Raffi. “Young children ... need them physiologically to be sound and healthy human beings.”

Raffi refers to himself quite seriously as a climate emergency responder.

Still, he acknowledges the heightened urgency of a moment in which millions of hectares of rainforest and bushland are on fire in Australia, in which the arctic has burned like never before, and in which the oceans are choked with plastic. Raffi recently wrote a song called “Young People Marching,” dedicated to Greta Thunberg and addressing climate change quite directly. While he hasn’t spoken to Thunberg, he jokingly asks, “Would you have her contact me?” (Interviewer’s note: I... do not have contact with Thunberg).

He sees “Young People Marching” not as a song for young children, but one to inspire their parents (millennials specifically) to fight for the world their children will inherit. Raffi refers to himself quite seriously as a climate emergency responder. “I like to say a climate emergency requires emergency responders [and] in case of emergency, break glass,” he says “And what I mean by that is get out of your comfort zone and attend to the situation, respond. And every single person is needed in this response. We can't be bystanders.”

After a lifetime of creating music for children, Raffi is resolute that his message isn’t really political (he does name-drop Bernie Sanders and Alexandria Ocasio-Cortez in the course of the conversation, but isn’t campaigning for anyone in particular). “Science transcends politics,” says Raffi. “It transcends world views. It's cold hard physics. If we keep warming the world, we keep destabilizing the fragile, intricate balance of nature and once that is thrown off-kilter past the tipping point, there's no coming back to stability that we've enjoyed in recent decades.”

As we look for ways to shape the world we’re leaving to our children, it occurs to me that Raffi has been giving us instructions all along. In fact, the Raffi Foundation for Child Honouring offers a course teaching nine principles, many of which ring true for our generation as thoughtful, progressive parents. Sustainability is one piece of the puzzle, along with embracing diversity and being a conscious parent. By creating this course Raffi has developed an avenue more actionable than folk songs.

I might sing fun songs for young children, but as you know, I've had earth songs along the way.

He wants to craft a world and a population that will grow up with the values he’s been singing about for the past 40 years. On the most personal level (Raffi asks for my son’s name and says to give him a hug for him) I find myself moved by our conversation, by the care and thought this man has for each generation he’s touched. More globally, I find myself charged to implement some of what he’s been teaching and singing about in my quest to be a mindful, thoughtful parent in the 21st century. “I might sing fun songs for young children, but as you know, I've had earth songs along the way,” he says, and it feels as though he is addressing my generation, but also me personally.

As I poured water over my grinning 16-month-old’s head one Sunday, I was preoccupied with my hopes that his clinical bath would finally remediate a stubborn diaper rash. It was perhaps without notice that I had started singing to him — “Baby Beluga.” A song from my childhood, from records borrowed from the public library, all the way up to my current life. For all my worries as a parent from minor things like to diaper rash, all the way up to the seeming impossible challenge of climate change, Raffi’s songs provide a soundtrack for me and my son as we become citizens of the globe.

As I ended the last note, my baby echoed me, saying a new word for the very first time. “Haaappeee.”

Editor's note: A previous version of this article incorrectly stated Raffi's age and birth place. It has been updated.