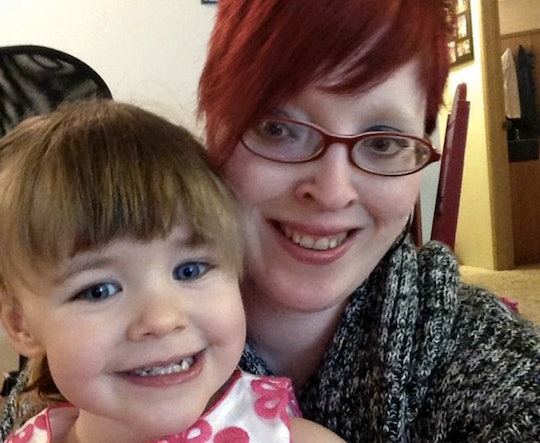 I grew up being the “good” kid. The one who tried desperately to avoid causing waves. I was a good student with a good attitude who always did what she was told and kept my head down. I wasn’t perfect, but I tried really hard to be. Maybe too hard. I suffered a major depressive episode when I was 15 and even though I went to counseling, I still struggle with depression and anxiety. While it’s a mental illness and no one’s going to tell me otherwise, much of my issues stem from feeling like I’m not good enough. And much of that stems from worrying way too much about what people think of me. But I don't want my daughter to grow up wanting to be what's euphemistically referred to as a “people pleaser," so instead, I'm raising her to be strong.

Growing up I was a people pleaser, believing what I wanted and felt wasn’t important or valuable when stacked up against everyone else’s opinions and feelings. It could’ve been over something small, like debating with a boyfriend over what movie to go see on our date — if I wanted to see a romantic comedy and he wanted to see an action movie, I succumbed to his desire and we went to see his movie. It made him happy, and that’s what you’re supposed to do in relationships, right?

In school, being a people pleaser manifested itself the most in group assignments. I would take on the majority of the load because I knew, through years of being shy and being walked all over, what everyone more or less expected of me. I wanted friends, and who wouldn’t be friends with someone who does the brunt of the work?

Recently, I realized that my fear of upsetting people or annoying was keeping me from posting anything on Facebook. Thoughts ran through my head like, What if they disagree with me and we argue about it? What if they find my constant posts about my kid or work annoying? What if they think I post too many motivational quotes, too many humble brags about my success as a freelancer? Will they think I’m uptight or better than them? The fear of upsetting other people and the desire to keep everything easy breezy was becoming all-consuming and exhausting, and it was screwing with my head.

One day not too long ago, I was watching my usually strong-willed 3-year-old daughter play with some older neighbor kids. She wanted them to ride bikes with her. They wanted to make mud pies. She did not want to make mud pies, which she vocalized quite loudly, but when they didn’t do what she wanted to do, she rolled over, stepped off her bike, and joined them.

On the outside it didn’t look like anything toxic. She didn’t get her way and she needs to learn that sometimes life doesn’t go the way you want it to. That’s an important lesson to learn, especially at such a young age. But I saw the look of defeat in her eyes. I saw the shadow of giving up and giving in to make people happy at the expense of her own joy cross over her face. I recognized it easily because that’s how I felt every day in almost every situation.

It was in that moment I knew I had to stop. I had to stop caring what other people thought, and I had to start fighting for my wants and needs. I had to make sure that my voice was heard over all the others if I was passionate about something. I had to stop worrying about what people thought about me concerning the little things — Facebook, sharing my joys and struggles with others – and start working on my own self-confidence.

I had spent 32 years of my life trying to make everyone else happy to the detriment of my own self-worth. I had to start fighting back for myself because, as I watched my daughter sadly walk away from her bike that day, I knew I couldn’t let my daughter do the same thing.

Because I want these things for my daughter, I now must begin to take these steps myself. As she watches my every move, I want her to learn how to be a strong, confident woman. I am learning to change my self-talk. I have to learn to firmly plant my feet, dig in my heels, and fight for what’s best for me.

These are hard lessons to learn at 32. It’s hard to reprogram your brain to change everything you’ve been hardwired to think for so long. My brain and heart have been molded by years of trying to make everyone happy, and reshaping those parts of me are going to take some time and tears and pain. I’m going to do it, though. I’m seeking out strong women in my own life, watching them, emulating them. I’m speaking before thinking when I have something important to say. I’m listening to self-help books and memoirs from successful women who unabashedly don’t care what others think of them.

I am learning, growing, and becoming a stronger, more confident woman at 32 so my daughter won’t have to. I want her to be strong now, not a third of the way through her life. She deserves to grow up with self-confidence well beyond her years. And she will inspire other people and motivate them and empower them simply by being her strong-willed self.

Change is hard, but I know I need to fight to change for my daughter. She deserves it. And she is one person I am more than happy to please.

More Like This
Marie Kondo Gives Up Tidying Post-Kids, Sparking Joy For Moms Everywhere
10 Of Julia Louis-Dreyfus' Best Quotes On Motherhood & Raising Her Sons
14 Recipes For Sick Kids When Everyone's Tired Of Canned Soup & Crackers
Viral Hives In Children: What Doctors Want You To Know
What Parents Are Talking About — Delivered Straight To Your Inbox