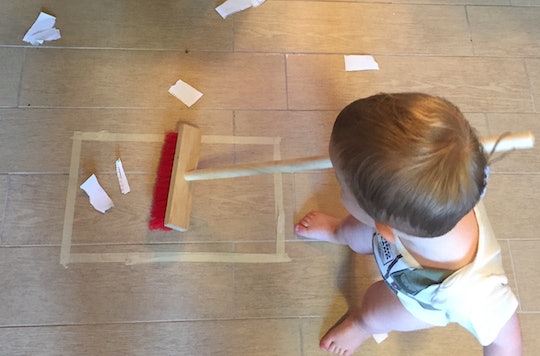 TBH I'm Only In The Montessori Philosophy For The Furniture

While I was pregnant, I signed up for a parents list-serv in a much more fancy part of Brooklyn than I lived and would read emails about parents touring daycares and reading books about different parenting philosophies while their babies were still in utero. I realized then that I was way out of my league. I had no idea what kind of mom I wanted to be. I didn’t even realize I had to subscribe to a parenting philosophy. I knew that I wanted to raise my son to be loving, kind, a free thinker and independent, and I had the advantage of a background in early childhood education so I had at least a bit of an idea of how to get him there. On considering it, if I had to pledge allegiance to a “philosophy,” I would say that my views on raising a tiny human align with Montessori.

Maria Montessori was an Italian physician who pioneered the Montessori approach in the early 1900s quite in the face of teachings at the time. She believed that children were capable of being independent and that, when given the trust and space to do things on their own and at their own pace, they would be successful. She replaced the large, clunky metal desks of her classroom with child-sized furniture that the children would move about themselves, gave them access to all the materials they would need to complete their tasks, and taught them practical life skills like sweeping, cooking and how to take care of their classroom environment. The approach quickly caught on and by the mid 1900s was becoming popularized in America.

It has gone from an educational philosophy to a minimalist decorating scheme for parents who have kids but don’t want their home to look like kids live there.

Fast forward to today and a quick search for “Montessori” on Pinterest will reveal photographs of wooden toys in neutral colors, well-organized toy shelves that are the height of a toddler, and images of nurseries with floor beds rather than a crib. These photographs paint a picture of a life that is way more organized, aesthetically pleasing, and calming than the one I currently lead.

There are companies who sell Montessori-specific toys, furniture, and other home accessories. It has gone from an educational philosophy to a minimalist decorating scheme for parents who have kids but don’t want their home to look like kids live there. Montessori toys are often earth-toned, made of wood, and often open-ended. They don’t blink crazy colored flashing lights at a child or sing some annoying song that will make you want to tear your hair out after hearing it for the hundredth time. Hence the appeal.

Aesthetic aside, the aspect of the Montessori philosophy that resonates with me the most is its focus on independence. Since I am still home with my son and do some quasi-homeschooling, I wanted to find out how I could incorporate some of the tenets of Montessori at home without shelling out the big bucks to send him to an actual Montessori program.

I spoke to Ginna Rose, an administrator at Brooklyn Heights Montessori School, for tips on how parents can bring pieces of the philosophy into their home. Her advice was for parents to “look carefully at their homes with the lens of independence for the child. Low shelves with few materials is the best way to store toys, books, games and art supplies. When everything is stored in a toy chest in a big jumble, it can be hard for a child to make choices,” she explains.

[My son] helps me empty the dishwasher and has a routine of taking off his shoes when he enters our apartment and putting them in the 'shoe basket.'

Every piece of the design should aim to help kids do things themselves, including clean up. “This can be achieved by everything having a place to be stored that is easily reached by the child,” says Rose. "Children should learn how to put on their own clothes, shoes, coats, et cetera, and also be given the time to accomplish these tasks.These things should also be stored where children can easily access them. Children love helping and easy chores like setting the table or helping to empty the dishwasher should be incorporated into family life.”

After our conversation I felt like Supermom because these are things I have been implementing in our home since my son entered toddlerhood. He helps me empty the dishwasher and has a routine of taking off his shoes when he enters our apartment and putting them in the “shoe basket.” I even had my husband lug home a used “learning tower” we found at a garage sale so my son could help prepare meals at our kitchen counter.

Whether you are looking for a parenting philosophy that helps you raise an independent little human or a way to entertain your child without turning your living room into something that looks like a McDonalds Playspace then you may want to look into Montessori. Just like any philosophy, parenting or otherwise, take the bits and pieces that work for you and discard the rest.

If you want to go full bore and create an environment Maria Montessori herself would envy, go for it. If you want to start with finding a more efficient way to organize your tots toys, that’s great, too. Anything you can incorporate into your daily routine to allow your child to do things for themselves, participate in daily tasks around the house and make choices for themselves is a step in the right direction.

The future of our world depends on the tiny people of today to grow up to be independent free thinkers who question the status-quo and if a Learning Tower and some toddler-height shelves will help to get them there then so be it, because as Maria Montessori once said, “Within the child lies the fate of the future.”

More Like This
I’m A Newly Single Mom. How Do I Get Over My Body Insecurity?
What Age Do Kids Start School? Here’s What You Need To Know
24 Amazing Harry Potter Costumes For Fans Of All Ages
12 Helpful Tips For Hiking With Kids