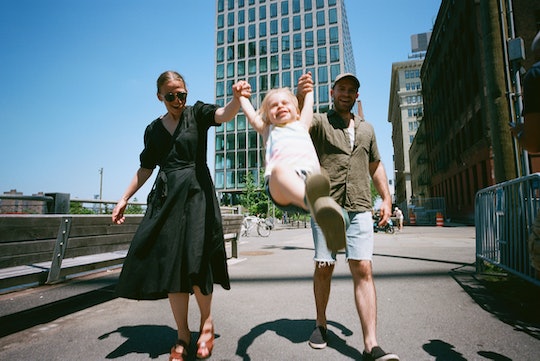 My Trilingual Kid Still Eats Chicken Nuggets, So Back Off

It happens all the time when I’m in public with my 2-year-old daughter: she’ll start talking. Insane, I know. The thing is, when she starts talking, she’ll speak a language that is not English much of the time. “Oh, how interesting! Does she speak two languages?” bystanders will often ask. And then comes the awkward part, where I have to very politely clarify that, I am, in fact, raising a trilingual child. Cue the raised eyebrows that say well lah-dee-dah. “That’s great!” they’ll say with a grit-toothed, lock-jawed smile — the subtext: “Give me a break, lady.”

After that, I scramble to explain that, no, I’m not trying to raise an obnoxious overachiever who was in piano lessons before she could walk. I immediately offer proof that I am, in fact, a normal human: “I went to public school in Florida, where hard-working teachers do their best in an educational Wild West unsupported by state income taxes!” Or, “Listen, my first words were Taco Bell!” Maybe the evidence indicates that I’m a little worse than normal — all the better.

My daughter’s multilingualism unfolded organically, so I’m not just trying to avert responsibility so I can avoid a good old fashioned public shaming: I truly cannot be blamed. Before she was born, my husband and I decided that she’d speak English (my native language) and Hebrew (my husband’s native language). When my daughter was 3 months old, we entered a nanny share with a Spanish-speaking family, ergo we hired a nanny who speaks Spanish with both of our children. Given the circumstances, we would’ve been negligent not to have her speaking all three languages, right? See? Absolutely not my fault. So why do I feel so scrunchy?

When I felt the shame of being That Mom weighing me down, I did what any Type-A New Yorker would do — I found a psychologist to talk it through. Janet van Hell, PhD, in addition to having the most metal name of all time, is a professor of psychology and linguistics at Penn State University. She also happens to be Dutch, and she has raised bilingual kids herself.

“This might sound silly,” I asked her. “But could you reassure me that I'm doing something good for my child?”

“Absolutely, you're doing something good for your child,” she tells me, not missing a beat. Phwew. Nice to hear that I’m not a Toddlers & Tiaras-level taskmaster with my kid.

“With language very often comes culture,” explains van Hell, who says that multilingual kids are often “more versatile in terms of being able to navigate and interact with people from different cultures.”

Kids who learn a second language before turning 1 are also, curiously, better able to unlearn a rule. In a 2011 interview with Big Think, Princeton neuroscientist Professor Sam Wang said that “if they learn that pulling on a string leads to a mobile moving or something else that they like — if the rule suddenly changes, they’re more rapidly able to resolve that conflict and learn the new rule.”

I feel a rising wave of motherly pride. “So, my daughter is going to be very sophisticated?” Lah-dee-dah.

“Well, these are lab tasks,” van Hell says, quelling the surge. “[Multilingual kids] may be five milliseconds faster than a monolingual child on a particular task. So, you're not raising Einstein. You need to have other skills for that.”

I believe my gut-reaction to minimize my daughter’s trilingualism comes from a larger paranoia about becoming 'that mom.'

You see, folks? Not raising an Einstein. My kid’s normal. I’m normal. We’re normal… whatever the hell that means.

So why is it that raising a bilingual child seems reasonable, but adding a third language nudges me across the rubicon to Crazytown? In part because we parents are an egotistical and soft-shelled lot.

We can get touchy and confused navigating a multilingual household where everybody does not speak the same languages. In my case, I only know what my husband is saying to my daughter in Hebrew about half the time. Sometimes it’s slightly annoying — and I do expect that annoyance to increase with time — but I try to listen and learn myself (for when they have secret conversations about Mom, obviously).

Sometimes children decline to speak one of their learned languages as they grow older, which can be fraught. “Language can become very personal,” van Hell points out. A parent may feel this decrease is tied to a larger rejection of his or her identity.

And while my daughter’s languages may make for conversation in the U.S., van Hell reminds me that my daughter would be unexceptional elsewhere. Globally, “the large majority of children are being raised with multiple languages,” van Hell says. “In other parts of the world, there's no such thing as monolingualism.”

I believe my gut-reaction to minimize my daughter’s trilingualism comes from a larger paranoia about becoming “that mom.” You know, the one who dutifully shepherds her children to classes in ballet and photorealistic painting and quantum mechanics. Whose kids are cooking and eating their own omakase, which they learned how to do when they lived abroad in Japan. (The imaginary children in this scenario are 3, by the way.) The mom who does too much, as opposed to just the right amount (note that the right amount already requires her to self-sacrifice her body, mind, time, ambition, and a full night’s sleep). The mom who is, I admit, proud that her child might be a little bit special.

Because there’s another way to look at “that mom.” She’s the one who has invested her heart and soul into the offspring she incubated in her torso for nine months of weird aches and pains; poking and prodding; and sparkling water and — forgive the expression — “mocktails.” She’s the one who adores watching her child learn and react to the wonders of life for the first time. The one who sees the world for what it is: uneven terrain where you probably don’t want to sneeze at even small advantages, even five-milliseconds-in-a-lab-experiment advantages. Perhaps it comes as no surprise to any mom that the world has plenty of contempt for all moms, who are women after all.

Ultimately, I know that my daughter’s trilingualism shouldn’t be a source of shame. Perhaps the next time my daughter breaks out her Spanish on the subway, it won’t lead to the dreaded Conversation. But, if it does, I will try my best to hold my head high and avoid explaining that, yes, she’s trilingual, but I feed my little rocket scientist chicken nuggets three times a week. The fried kind, not the baked ones. OK, fine, five times a week. She literally does not eat vegetables, and I actively lie to her pediatrician about that. As we speak, she is parked in front of her 127th viewing of Moana. I’m terrible, but only in the most likeable way.