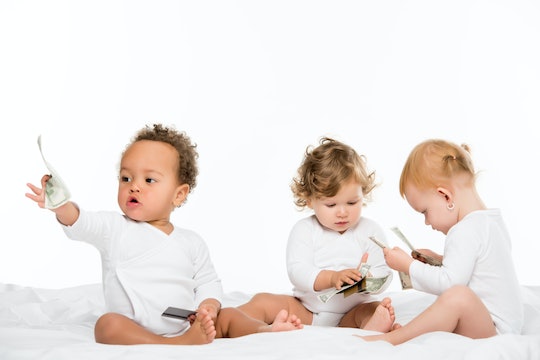 Raising Kids Is Expensive, But It Turns Out They Cost More As Adults

Ask people if raising kids is cheap and they'll tend to be pretty honest about telling you all the ways it isn't. With kids, it can seem like there's a never-ending rotation of expenses — from clothing, to school supplies, field trips, healthcare, and more. Many parents look forward to the day their kids are financially independent, but when exactly is that? According to a new study, it turns out kids cost their parents more as adults.

The cost to raise children has continued to increase over time. For a middle-income family to raise a child born in 2015 through the age of seventeen, the United States Department of Agriculture found that it will cost parents $233,610. The USDA's reported noted that price was a 3 percent increase from the previous year.

For most families, the USDA's report found that housing takes up the majority of expense, at 29 percent of the cost, with food following at 18 percent. However, as Bloomberg noted, the report doesn't track payments for college or financial contributions from non-parental sources, including government aid.

Looking forward to your kids' financial independence isn't a sign of a bad parent. Traditionally, society liked to imagine that kids would achieve independence not too far after turning 18, but is that the reality anymore?

"The Financial Journey of Modern Parenting", a new survey co-sponsored by Merrill Lynch Wealth Management and AgeWave, decided to take a deep dive into the cost of parenting. According to Market Watch, this study is the third in a multi0year research series examining five distinct life stages: early adulthood, parenting, caregiving, widowhood, and end of life.

For this survey, parenting was broken down into three distinct phases: infant / toddler, elementary / high schooler, and adult, according to My ND Now. Money Watch noted that the survey involved more than 2,500 respondents in the United States over the age of 18 who are parents to one or more children of any age.

Now, you might think that the costliest phase comes when kids are little, when they require diapers, daycare, and a lot of doctor's visits. You'll be surprised to know that isn't true at all. According to My ND Now, only 11 percent of parents said that was when they spent the most on their offspring.

Instead, the most expensive point is actually when children come into adulthood. According to Merrill Lynch, 79 percent of parents with adult children provide financial support for living expenses big and small — from weddings to phone bills.

“In this new era of delayed financial independence of young people, financial planning is no longer a solo or coupled activity. It’s become an ongoing family project with longer and different social, housing and economic interdependencies than we’ve seen before.”

The study found that American parents spend $500 billion annually on adult children between 18 to 34 years old. According to Merrill Lynch, almost three out of four parents put their child's interests ahead of their retirement needs.

This marks a major shift in how personal finances are being approached. Typically, American society places emphasis on doing everything alone. But, as workers haven't seen wage increases in decades and new generations are wracked by modern problems like student loan debt, that isn't practical anymore.

And although it might seem nerve-wracking, it makes sense that, as the economic field continues to shift, that will have an impact on how parents and their children interact.